Summary: Anyone Can Do It by Duncan Bannatyne 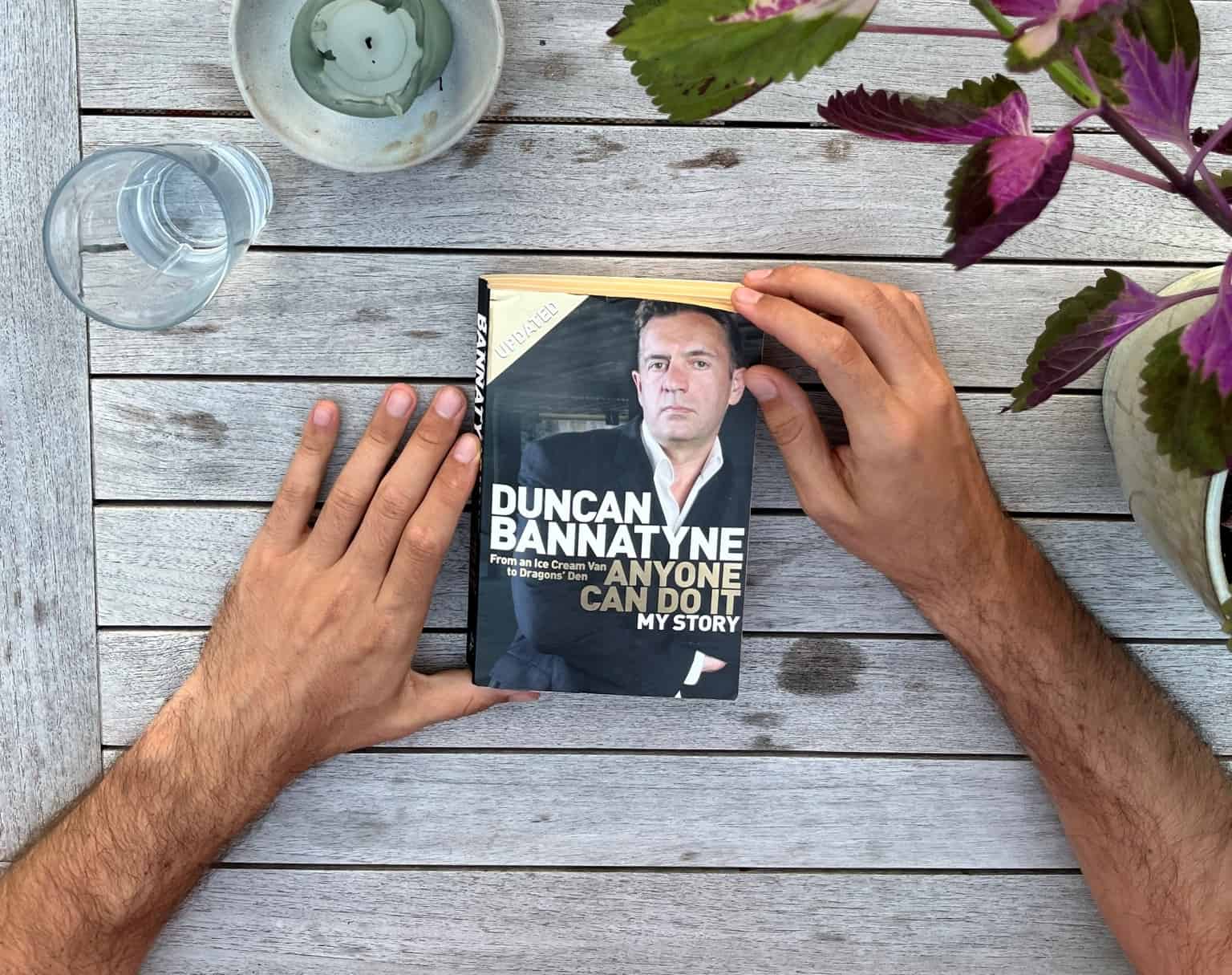 In this autobiography, Duncan Bannatyne shares his road from growing up in a working-class family that had to share a house with six other families, through quitting school and surfing on Jersey shores, to starting his own business well in his 30s and ending up with a fortune worth hundreds of millions.

Bannatyne came from a working-class family – his father was deployed in Asia, mainly Thailand, and worked in the foundry following the end of the war. The family lived a very modest life, as they were sharing one bedroom in a large house inhabited by 6 other families.

During his childhood, Bannatyne realized that he couldn’t afford the same things as some of the kids around him – while most of them were traveling for holidays with their families or riding bicycles, Bannatyne didn’t have access to any of those. That’s when he realized he was poor and decided to become rich.

His school days weren’t a prosing start in his quest to gain fortune. Bannatyne was a bad performer in school, interested mainly in PA. However, he had a talent for mathematics, specifically arithmetics, which helped him enroll in Clydebank High School. Because of the lack of interest in any class, he quickly realized that school was not his call and quit at the age of 15.

Soon after dropping out of high school, Bannatyne decided to enlist in the Royal Navy. His service to the army was set for 12 years but didn’t last more than 5 as he was dishonorably discharged. The reason – he pushed the officer overboard, an event caused by several factors, as he describes in the book: to impress his shipmates, to retaliate for the “abuse” of the authority, and to get out of the Navy as he was becoming increasingly disappointed in.

Bannatyne ended up spending 9 months in the military detention center at the age of 19. After paying his debt to the military, he spent the next several years working primarily as a mechanic, traveling around the country to repair tractors.

At the age of 25, he moved to the island of Jersey, where he continued to switch jobs, including selling ice cream, which would become an important experience for his first business venture. He was also a surfer and lived a relaxing life.

Until he was 30 years old, Bannatyne didn’t possess any savings nor had a bank account. At this period, he decided to get back to his childhood dream and start his first business venture. He bought an ice cream truck for 450 pounds and started the ice cream business, which became very successful.

From this point on, Bannatyne’s entrepreneurial journey started to heat up – he sold the ice cream business as he wanted to take advantage of the government’s legislation, subsidizing businesses that dealt with the care of the elderly people. His nursing home business expanded to children’s care, and after several years he sold it for 28 million pounds in total.

At this point, the success story takes over fast. He started his most recognized business, Bannatyne Gyms, and expanded into the fitness and health sphere, where he owns the largest chain of health clubs in the UK.

Aside from his business ventures, a significant portion of the book is dedicated to his humanitarian work. Bannatyne has a particularly touching story of his encounters with orphans during his trip to Romania, which led to some alleged spiritual experiences.

This autobiography tells a story of an “ordinary” man, raised and living in poverty for a significant part of his life, who managed to gain fortune without any previous connections in the business world. As such, this book delivers a true “how I made it” story that will inspire many people struggling to find their place in the world.

Most of all, Bannatyne focuses on skills needed to run a successful business. Considering his modest background and lack of formal education, he needed to develop specific mental skills that helped him compete in the market. His attitude, not backing down, and taking calculated risks played a considerable role in his rise to success, and the readers will have a chance to get an insight into his mindset in this book.

While not heavy on business strategies, Bannatyne does go over some fundamental principles in the way he conducts his business. You shouldn’t expect an in-depth breakdown of how to organize your business or how to develop strategies, but the author will get the surface of how he made certain decisions that led to good ROI.

“Anyone can do it” is marked as an easy and quick read, according to most readers. Overall, the book can be divided into two parts based on the level of detail and the overall tone.

Before he managed to start a profitable business, Bannatyne tells a story of how he made it. That upbringing part of the book is much slower in pace, and the author explains in a bit more detail his childhood, growing up, quitting school, and working various jobs before opening an ice cream truck business.

Once Bannatyne managed to make profits, things developed much faster, and the book’s tempo speeds up. From that point, he doesn’t pay much attention to the details but instead gives a brief overview of his business ventures, and the emphasis shifts to his ability to make a profit without providing an in-depth analysis of the process.

The book is overall positive and motivating, and Bannatyne displays his unique sense of humor along the line. However, there are parts of the book, especially the ones where the author discusses his charity work and a trip to Romania specifically, which are rather emotional and make some readers cry.

“Anyone can do it”, as the title suggests, is meant for any reader interested in the first-hand experience of a person who succeeded in business life starting from “the bottom,” without any business connections or a headstart whatsoever.

Considering all the initial roadblocks in finding success, from living in poverty to quitting school, people who struggle in life and need some inspiration from someone who had the same struggles and got out of them could enjoy this book.

The humanitarian aspect of Bannatyne’s life, along with this colorful and difficult childhood and upbringing, makes a good human interest story and, as such, is recommended to readers with a specific interest in that part of the biography.

As a business book, “Anyone can do it” can be helpful to people interested in starting their own business or who are at the very beginning of that road. Bannatyne lays out some detailed insights into how he managed to build the foundations for his business empire, and the author does an excellent job of detailing the beginning of his business journey.

However, according to readers already in the business world, this autobiography won’t provide a detailed description of the ins and outs of how an entrepreneur conducts business systematically or share all those details and little secrets of success – this book contains rather general motivational messages.

How well does Anyone Can Do It compare with other titles in this field?

As a biography, many people will compare “Anyone can do it” with the autobiography of Richard Branson, “Losing my virginity.” Both authors started from zero, without any previous business connections and family relationships they could exploit as a headstart, and managed to gain fortune with their unusual work ethic and determination. While Branson’s life story is more of a hero’s journey and contains some insane adventures of his, Bannatyne is more relatable to the average reader and thus easier to connect with.

As a business book, this might not be one of those that people within these circles will talk about and recommend. Several readers pointed out that they preferred “Tycoon” by Peter Jones as the alternative.

The audio version of “Anyone can do it” is narrated by David Rintoul and runs for 3 hours and 8 minutes. Listeners had high praise of the narrator’s voice, intonation, and accent, saying that his enthusiasm while telling Bannatyne’s story was “contagious.”

As the content of the audiobook doesn’t include any extra material compared to the printer version, listeners had similar feedback on the content itself – a very interesting autobiography and success story, without any “business secrets” revealed down the road.

What do readers say about Anyone Can Do It?

Delegating is one of the keys to success

In the book, Bannatyne lays down some fundamental business principles that helped him succeed, and among those, most of the readers noticed that delegating was among the most important ones. According to some readers, this book “hugely advocates mastering the art of delegation.”

Not anyone can do it

While most of the readers admire the fact that Bannatyne came from a poor family and had to build his own business entirely by himself, with no formal education, readers still feel like the skills and mentality that he possesses are not something characteristic of “anyone.”

Because of this, many readers think that only people with a certain mentality and passion can manage to replicate Bannatyne’s success and that this is not something that “the average person has in them.”

Not a lot of focus on hard work

Readers noticed that Bannytine didn’t brag a lot about how hard he worlds every day and that this is something that he sporadically mentions throughout the book without ever emphasizing the importance of hard work for success.

This is not a critique of the author’s lack of dedication but rather the fact that he failed to point out and bring attention to readers to how much sweat and tears are invested in his success. While Bannatyne is obviously one of the most hardworking people, he fails to communicate that message to the readers.

Readers were motivated by the fact that Bannatyne started building his business empire when he was in his 30s, starting from scratch. They find this fact very motivating and make them feel like it’s never too late to change your life and find success.

They also appreciate the fact that the author wasn’t shy about sharing all the struggles he encountered. Compared to other “how I made it” books, where authors like to skip the part where they struggled and quickly jump on to the part where they’re doing great, this book displays all of the roadblocks that were presented to Bannatyne in greater detail.

A lot of bragging

Since this book was published in 2007 but also tells a story about the author who started his business venture during the 80s, readers find some of the concepts from this book outdated and not very applicable to the current situation in the world.

Similarly, people point out the fact that Bannatyne is facing some financial problems currently due to his own business decisions and want to hear more about it. One of the readers points out the fact that in 2013, Bannatyne was reportedly over 133 million pounds in debt, and they want to find out how he managed to do that and see an update of the book that contains that part of his business life.