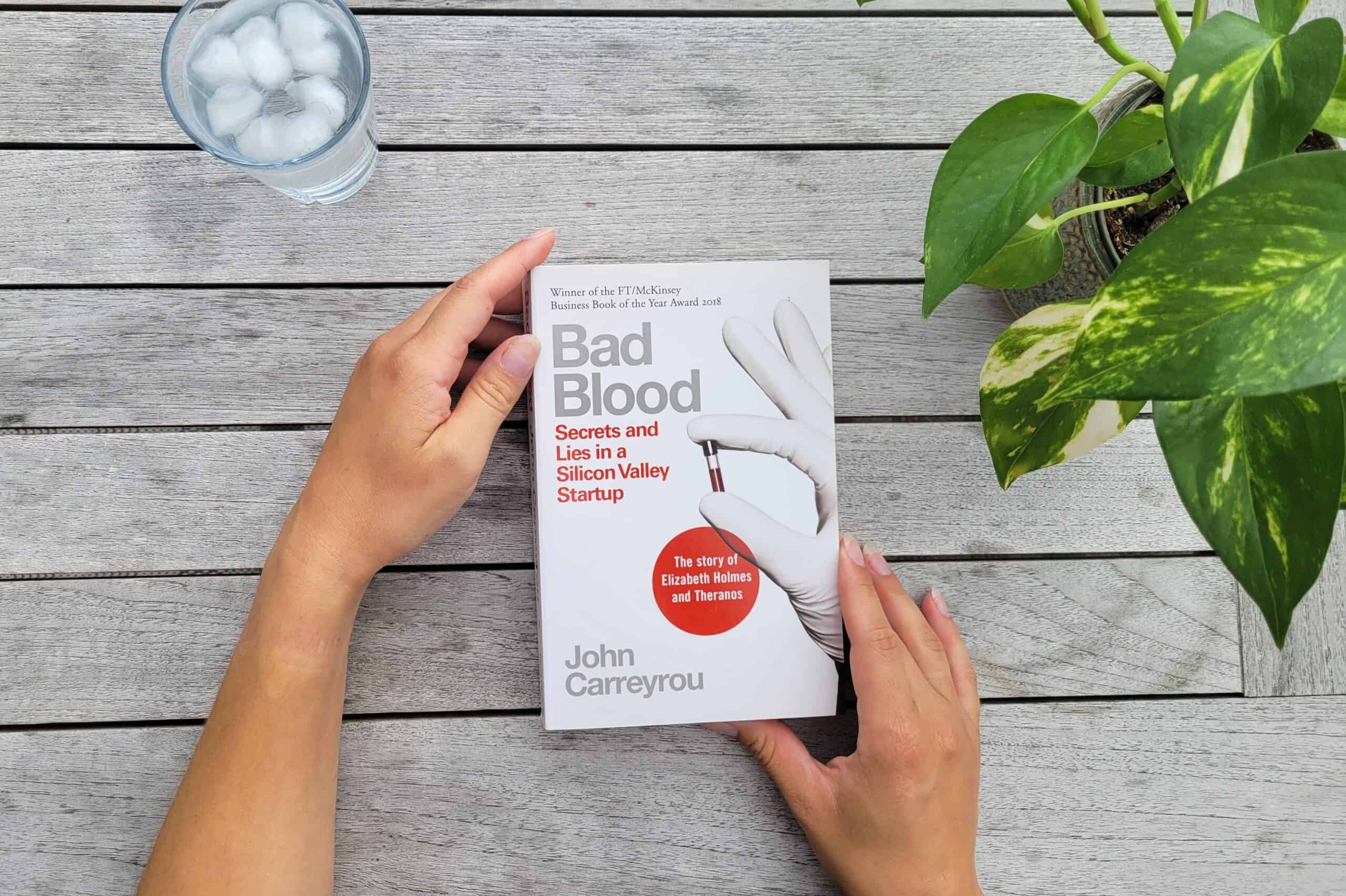 John Carreyorou delivers a story on the rise and fall of “Theranos,” a company founded by Elizabeth Holmes when she was 19 years old. The book follows the company from its founding, a billion-dollar evaluation that made Holmes a billionaire, ended with the revelation of the fraud that Holmes managed to hide from the investors and the public for years.

The story begins in 2006 with the introduction of Theranos, a company established 3 years prior that offers a revolutionary way of blood testing. Their innovative system offers the users blood testing without needles and the requirements of the lab.

The company is run by Elizabeth Holmes, who dropped out of Stanford during her sophomore year, at 19 years of age, in order to start her own business. The company’s management is full of competent, well-established experts and people with decades of experience at large tech companies.

The tone of the story suddenly shifts as the author describes a meeting after which some major concerns were raised by employees. They started to feel untrustworthy of the blood testing technology, and the company’s CFO discovered that Holmes used fake blood results.

After raising his concerns and facing Holmes with the evidence of faked results, he gets fired. This short prologue was the author’s way of introducing the main topic of the book, which will be covered in great detail.

Carreyrou describes the background of Elizabeth Holmes, the person behind the Theranos. Elizabeth comes from a respectable family – her ancestors on her father’s side were successful doctors and entrepreneurs, while on her mother’s side, she’s a descendant of one of Napoleon’s generals.

However, Elizabeth’s grandfather and father managed to waste the family fortune, and her father was insistent on nurturing her ambition and desire for success. After being accepted into Standford, where she worked in the research lab and spent a summer internship testing patients, she decided that there was a better way of getting samples. She quits Stanford and starts her own company.

Holmes insists on patenting a device able to gather a blood sample without using needles and small in size, requiring tiny amounts of blood. The author provides a detailed insight into the initial phases of prototypes and how she organized the company (teams were not allowed to communicate with each other etc.).

As the company moved to a new building in Palo Alto in 2008, things started to get more complicated and dark. The company loses some of the most loyal employees while Holmes uses dirty tricks to deny stock options to some employees by investigating them to find some compromising things.

Charreyrou introduces Ramesh Balvani, called Sunny, Holmes’ boyfriend whom she meet during college days, who works for Theranos and is a member of the board. The author states that he was in charge of some “dirty work” for Holmes, like bribing foreign officials during the company’s swine flew testing in Mexico.

As Theranos partner with Walgreens, agreeing to sell their devices in 30-90 stores by 2011. In order to avoid rigorous FDA approval process for their devices, Theranos decides to find a workaround and states that the test they develop are “laboratory-developed”, and as such are overseen by CMS, a much less strictly regulated.

Some Walgreens employees are skeptcal of the deal and find Holmes and the company paranoid and operating in secrecy. They are denied access to Therenos’ labs, test results, and are forced to sings documents discabling them to examint the devices and find out more about their structure.

The suspicions and problems slowly start to emerge as more companies and institutions connected with Theranos begin to realize some glaring issues with the tests and the company’s transparency. This includes a potential collaboration with the military to supply their test devices in Afghanistan, after which the military official (“Ltn Shoemaker”) requires FDA approval. Theranos never accepted the offer to perform the trial test for the accuracy of devices and avoided the FDA’s control.

As things start to take a darker note, one of the Theranos employees, Ian Gibbons, committed suicide at the time of his testimony in court regarding the lawsuit between Theranos and John Fuisz over the alleged stealing of Theranos’ patent. Gibbons has earlier noticed some issues with the Theranos’ devices but didn’t want to lose his job and was very nervous and anxious at the testimony.

Carreyrou continues the story by describing the “going live” event, making Theranos devices officially commercially available at Walgreens’ stores. He details all the technical problems that the devices still have and how Holmes had to find workarounds in order to keep them afloat.

As the company prepares for the campaign in the media (article in the Wall Street Journal), Holmes is hopeful that it will help Theranos with another round of fundraising that will grant them the “unicorn” status, valuating the company at over $1 billion. At this point, several new and powerful figures joined the board, attracted by the stock ownership, including Henry Kissinger and General Matti.

The Wall Street Journal article, where several false claims were made, followed by Holmes’ statements on the ability and effectiveness of their devices, including fake submission for FDA approval, led to Theranos netting $96 million after the fundraising and evaluation of $9 billion.

With the number of people already with some knowledge or strong suspicion of Theranos’ device efficiency starting to increase, they start connecting to one another. They share their knowledge and skepticism, along with personal experiences with Holmes and Theranos, and after collecting evidence, they decide to contact an investigative reporter. This is where the author of the book, John Carreyrou, enters the story.

Right at the beginning, Carreyrou is faced with a wall of silence, as most of the people that could potentially witness the real developments in Theranos are scared of the company’s lawyers and lawsuits. When the meeting with the author and the company’s representatives finally occurs, everything important discussed is marked trade secret, and after the talk, lawsuit threats are sent to the WSJ.

After several attempts to kill the story, including a conversation with Rupert Murdoch, one of the owners of the WSJ, the story named “A Prized Startup’s Struggles” finally runs on October 15th, 2015. It causes a storm of comments, actions, and questions about the company, followed by more WSJ articles that follow up on the story.

From that point on, the scheme started to get uncovered piece by piece, and Theranos soon lost its licenses, followed by multiple lawsuits, both against the company and Holmes. In total, Theranos faked over 1 million blood tests, which led to some of the users suing the company as well.

“Bad Blood” is a story by an investigative reporter about one of the largest corporate frauds in the history of the USA. The author, who is also the main reporter in the story published in the WSJ, lays down the history of the company, its early rise, and $9 billion evaluation despite some glaring issues with their technology, followed by the fallout of the eventual demise of the company.

Carreyrou delivers a fiction-like thriller based on true events, which will keep the reader at the edge throughout the whole book. The book also shows the true value and importance of investigative journalism, which led to one of the most fascinating discoveries that affected millions of people.

After the author gets involved in the story, the book transforms into a first-person testimony of how he managed to collect information and put together one of the fascinating stories the WSJ has published.

While the book is based on true events, many of its parts have fiction-like qualities, especially related to the thriller/mystery genre. The author also introduces numerous characters but does a great job of detailing their importance to the story and making them easier to remember.

Since the book relies heavily on understanding the science behind blood sampling and testing, the author uses quite technical language at times but makes sure that it’s easily digestible for the readers.

“Bad Blood” offers a variety of topics interesting for audiences who like stories on corporate frauds, investigative journalism, and science (a lot of in-depth descriptions of how blood testing works).

Fiction lovers will also enjoy this book as it has elements of mystery and thriller, and this story at times seems like it’s complete fiction. The fact that all the events actually happened will add even more fascination to the story.

The audiobook version of “Bad Blood” runs for 11 hours and 37 minutes and is narrated by Will Damron. The consensus among the readers is that both the story and the narrator are top-notch in the audio format, delivering a thrilling story that kept them on the edge of their seats while listening to it.

Listeners give special compliments to Will Damron and claim that the story “wouldn’t be as good if not for him,” especially since he was taken with narrating the voice of Holmes, who changed throughout the story depending on the circumstances.

What do readers say about “Bad Blood”?

Hard to put down

Many readers found themselves immersed in the story so much that they read the book in one breath. The consensus among the readers was that the story, and the way it’s unfolded, are so captivating that it keeps you engaged from start to finish.

Easy to read through all the scientific details

Even though the author uses quite a scientific language when describing the technology and the procedures involving blood testing and sampling, many readers not familiar with this area found the book easy to read and understand.

They give compliments to the author for making their experience enjoyable even with all the technical language employed, including various legal terms. The author made sure that the book is engaging enough to every reader even with all the expert terminology.

Readers found this story so fascinating and were very pleased with the way Carreyrou laid down all the details that they kept digging for new information on Holmes and Theranos after finishing the book. On many occasions, readers explained how they, immediately after they completed the book, started browsing the internet in order to gain more information on the case.

Great even for fiction lovers

Many of the readers who found this book fascinating are not fans of nonfiction. However, they feel like “Bad Blood” has all the elements of a great fiction book in the detective/thriller/mystery genre, and the fact that their fiction-like events actually occurred was a cherry on top for them.

“This is not the normal fiction I love to read. Instead, it’s the unbelievable truth,” was the comment of one of the readers. “The story almost feels too ridiculous to be real at a point.”

Most of the readers were shocked how Holmes was able to hide the truth and build a $9 billion company based on lies and false promises. The fact that she had so many powerful and rich people alongside her and that these people were completely unaware and unsuspecting of what was really happening made some readers conclude that having good connections in the business world can get you a long way, even if what you have to offer is basically worthless.