Summary: Banker to the Poor: The Story of the Grameen Bank by Mohammad Yunus 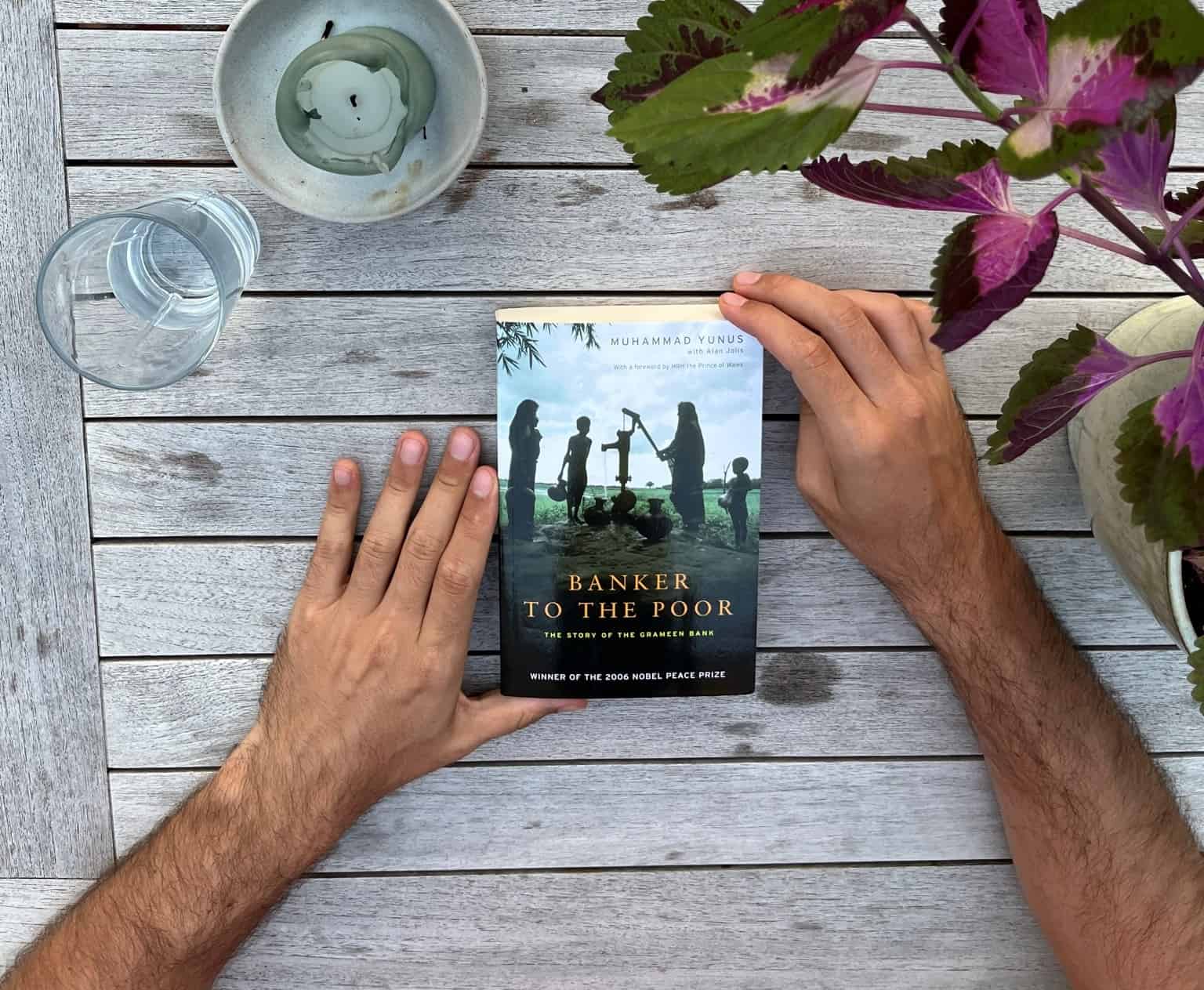 “Banker to the poor” is an autobiography by Mohammad Yunus, a founder of Grameen Bank and a Nobel Peace Prize winner for contributions to micro-crediting, and how this process helped people previously not qualified to get a bank loan to start their own businesses and get out of poverty.

The book started in 1976 when Dr. Junus taught economics at Chittagong University in Bangladesh. He’s not happy with the abstract nature of his teaching and desires to devise a practical solution to the problems of the local population.

He goes around local villages and interviews people to understand what they actually need to escape poverty. He realizes that they need credit and decides to start a bank that would help people unqualified to get a loan at traditional banks.

The introduction finishes with arguments Dr. Yunus had with people at the World Bank, arguing that poor people don’t need aid but loans to start their businesses. He decided to prove that poor are bankable and are able to start economically viable businesses.

Dr. Mohammad Yunus takes the reader back to his beginnings, starting with his childhood. He introduces his family, a father who was the owner of the jewelry business on the ground floor of their family home, his 13 brothers and sisters (5 of which died as infants), and his mother, who had the strongest influence on him.

He was born in 1940 in Chittagong, an Indian city that would later become a part of Pakistan in 1955 and then Bangladesh in 1971. While the father was the provider for the family, making sure that the kids were educated, the mother was in charge of raising the children and disciplining them.

At an early age, Yunus found his passion in art – photography, graphic design, drawing, painting, and film. He watched Hollywood and Indian movies and even started filming with his friend.

Once he started going to school, Yunus found his first passion in boy scouting. This helped him travel and see the world, as he was able to visit Canada, Japan, and the Philippines during his school days. Boy scouts showed Mohammad that he possesses leadership qualities and discovered his passion for teaching.

Moving to the USA

After graduation in the field of economics, Yunus started teaching economics while at the same time running a business with his father. The company dealt with packaging and printing, and the business was very successful for the family. However, after a while, he decided to focus solely on education. He got his Ph.D. in the USA, where he worked under Nicholas Georgescu-Rogen.

During his stay in the United States, Yunus married a Russian-born literature student and lived with her in a small town in Tennessee, near the place where he was teaching. The peaceful family life in the United States didn’t last for very long, as at the beginning of the 1970s, some turbulent events started to occur in his home country.

Yunus was also involved in forming a government of Bangladesh, creating and running its information center from Tenessee. In 1971, after Bangladesh won its independence, Yunus decided to leave the United States for Bangladesh and participate in building a country as a member of its first government.

Yunus’s career in politics didn’t last for very long, as he was unsatisfied with the impact he was making and the role he had in the new government. He tried to get a more meaningful role and more responsibilities but didn’t manage to succeed.

Disappointed in this political career, he decided to leave the government and return to teaching. This time, Yunus was an Economics department head at Chittagong University. He was living with his parents, away from the campus.

In 1974, a famine was spreading all over Bangladesh, people were living in poverty, and Yunus decided to take some actions to eradicate poverty. However, he was unhappy with the impact he was having on the classrooms and decided to start working on the ground. He was interested in listening to firsthand experiences of local villagers to understand what they actually needed, as he felt like his teachings were too abstract and not very helpful to local populations.

Yunus visited local villages with his colleagues and students and interviewed them in order to find out what are the most important problems they were facing and how to solve them effectively. He quickly realized that the poorest people needed credits, something that they weren’t able to get as they didn’t satisfy banks’ standards for a loan.

These people had to buy supplies from the middleman and sell made goods back to them for a small profit margin, often making only 2 cents per day. Loaning from banks was not an option for them, and lending money from local money lenders was dangerous, as they demanded 10% interest per week or even per day.

When he found out that these people needed $27 to start their small businesses, Yunus decided to start funding them by himself at the beginning, while forming an idea of a bank that would deal with loans to the poorest and eradicate poverty. At this point, the idea for Grameen bank was born.

He started taking to big banks and tried to convince them to start loaning money to the poor. In the beginning, Yunus acted as the middleman between big banks and local villagers, and he was the one who had to guarantee their loans personally. Gradually, as things started to improve, he was able to open the first branch of Grameen Bank.

Principles of conducting business in Grameen bank were the different and often complete opposite of what conventional banks established. His system, including a faster repay rate (first on a daily, then weekly), forming groups of borrowers who guarantee for each other, making all transactions and system completely open, and enabling anyone to see how their system works, is something that was revolutionary in the banking industry.

Grameen also became famous for borrowing money almost exclusively to women. Over 98% of their clients we women, and Yunus justified this with the idea that women tend to invest earned money in the house, kids, and the family, thus helping the family to prosper faster as opposed to men, who tend to spend the earned money on themselves.

During the 1980s, the bank started to expand rapidly, opening over 100 branches all over the country and eventually expanding internationally, having branches opened in the United States, Malaysia, Philippines, India, Nepal, and Vietnam.

The bank operates successfully, with a recovery rate of over 98% and over 90% of loans being financed from the bank’s personal funds. The bank was also making profits every year except for a couple of years heavily affected by the cyclone in Bangladesh.

“Banker to the poor” is a first-person record of how one man who had a dream of eliminating poverty from the world changed the way financial institutions work and helped people otherwise invisible to the banks.

Yunus is a passionate man, and his passion is evident throughout the book, from his early love for photography, design, and scouting, through education and desire to teach and educate younger generations, to founding and running the most unusual bank at a time, which helped millions of people all around the world.

This book is also a record of the history of the Indian subcontinent, from turbulent times after the country gained independence from Great Britain to independence movements that led to the creation of Pakistan and Bangladesh. Yunus describes these events with great interest, as he played a role in these processes, most of all fighting for Bangladesh’s independence.

Lastly, “Banker to the poor” is a story about a dream coming true. Yunus argues that before any change can occur, a man has to dream about it, and that dream is just a first step in the process of reaching the final destination.

“Banker to the poor” is an autobiography from the first-person perspective. Dr. Yunus is guiding the reader through his life, from early childhood and education, through some of the most critical moments in the history of the Indian subcontinent, to the foundation of his bank and revolutionary loans.

Yunus tells a powerful story with a lot of passion, and readers can experience that passion firsthand through his eyes. Descriptions of poverty in the third-world countries are specifically colorful, and readers not raised and who lived in these areas will get an in-depth understanding of how difficult it was and still is to live in these places.

People interested in social issues and how can the existing system can and should change to help people mainly invisible to the system could find this book very interesting. The story of Grameen bank is truly unique and remarkable and can serve as an example of how it’s possible to run a successful, economically viable business while helping people in poverty.

This book also contains a lot of historical records and firsthand accounts of the events that led to massive changes in the Indian subcontinent. The author had an active role in some of these events, most of all fighting for the independence of Bangladesh, so readers interested in history can find some exclusive information in this book.

For economists and people interested in the economy, this book offers a new perspective on how economic and financial institutions can operate to successfully address some of the most critical problems in the world, such as poverty. However, the book doesn’t provide a detailed breakdown of some concepts in economics.

What do readers say about “Banker to the poor”?

A consensus among the readership is that the story of Grameen bank is truly inspiring and unique. This book provides something for everyone, but the overall impression among the readership was that they’ve never encountered this type of “a dream come true” story when it comes to overcoming poverty and influencing change against the established system.

Most readers were astonished by the description of poverty in Bangladesh and all the troubles they encountered while trying to provide for their families. Poverty in third-world countries is something that most readers can’t relate to, and they find Yunus’s records helpful and insightful. He draws them into his world, and thanks to his testimonies readers are able to perceive the extent of problems that people in poor countries face.

Importance of having a dream

Yunus insists that, in order to make the change as significant as eliminating poverty from the world, this process needs to start with a dream. Readers recognized how hard and committed Yunus was in pursuing his dream and how it helped him fight against the system and overcome significant obstacles.

Some readers feel like Yunus didn’t commit a lot of time in the book addressing critics to the concept of Grameen Bank and feel like there are some questions left unanswered in this regard. Most of all, people are interested in hearing more about how the concept of loans to the poor translate in other countries, most of all Western countries, with different culture and ways of doing business.

No examples of successful stories

While the problems and the origin of Grameen are explained in great detail, some readers think that the book lacks examples of people who benefited from the loans. In the same way Yunus describes the old woman who makes stools for a margin of 2 cents per day with most of her profits going back to the middleman, readers want to hear how she succeeded after getting a loan from Yunus and Grameen.

This lack of success stories is what’s missing from the book, and people find it unfortunate that Yunus didn’t focus a bit more on real-life examples of people who directly benefited from the loans that Grameen offers.