Summary – Freakonomics: A Rogue Economist Explores the Hidden Side of Everything by Steven D. Levitt and Stephen J. Dubner 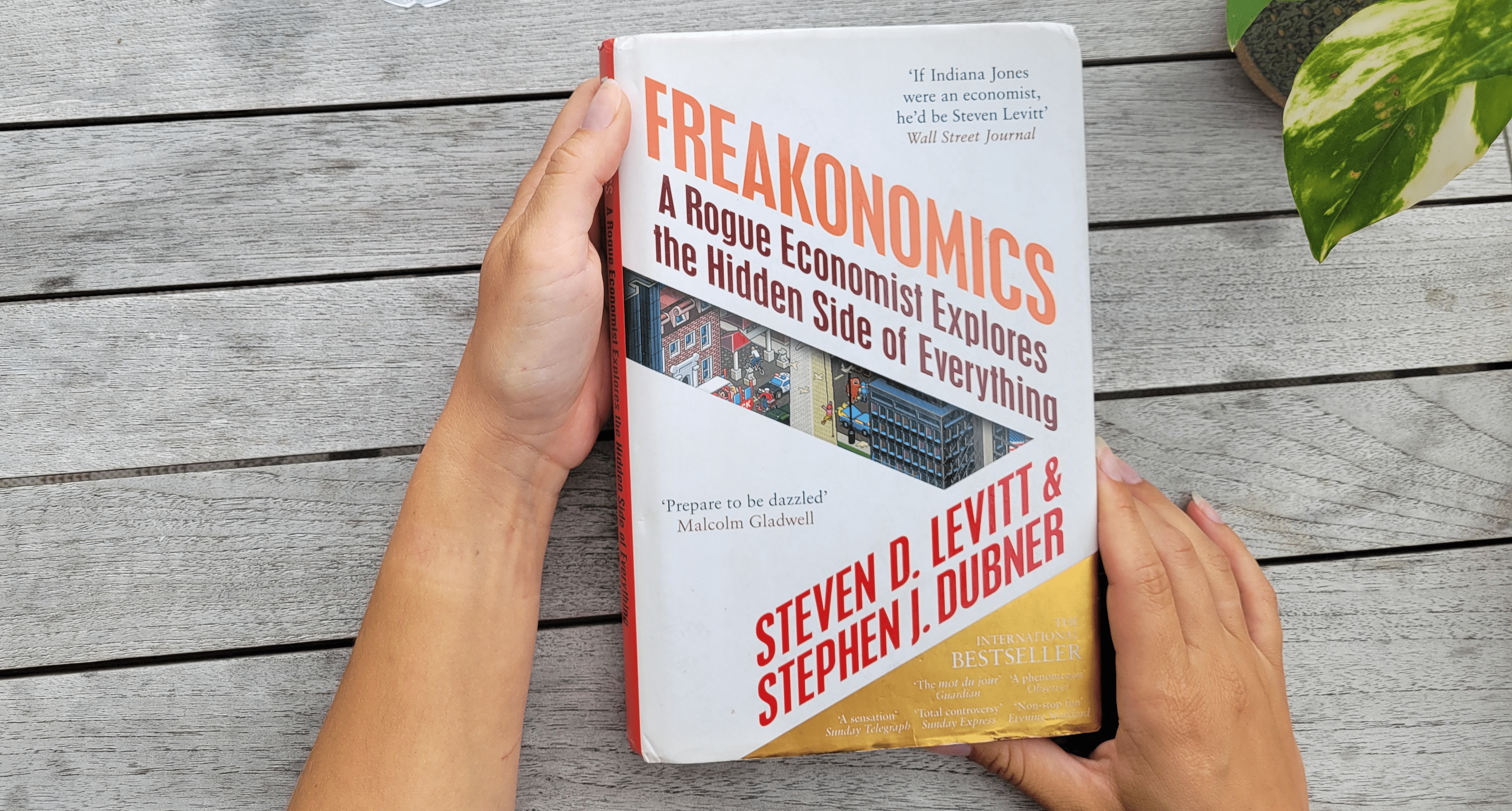 Freakonomics: A Rogue Economist Explores the Hidden Side of Everything by Steven D. Levitt and Stephen J. Dubner is a look at how economic theory can be applied to the real world to understand what is really going on.

Levitt claims that economics is the study of incentives. He uses this idea to study everyday life and problems through the prism of economics.

The book is made up of 6 chapters where the authors examine a different social issue in each chapter – some of which is based upon research Levitt has done throughout his career as an economist.

Using the tool of microeconomics in other fields, Levitt and Dubner come up with weird and wonderful explanations and analogies that will challenge your understanding of how things work and the reasons for it.

This is an interesting read for anyone curious about economics or how the world around us works.

Freakonomics: A Rogue Economist Explores the Hidden Side of Everything by Steven D. Levitt and Stephen J. Dubner is a collection of six social issues that have been examined using the statistical tools and techniques of economics.

There are six chapters. Each of these chapters examines a different social issue or concept and looks to examine either what is happening or why it is happening using normal tools that an economist would apply to a standard economic problem.

What makes Freakonomics so interesting is that very few people have used the tools in this way before, so a lot of interesting, quirky, or hard-to-believe causes are thrown-up throughout the book.

The first and longest chapter examines incentives in human behavior. Economics is defined as the branch of knowledge concerned with the production, consumption, and transfer of wealth.

This is where Levitt and Dubner explain their personal perspective that economics is the study of incentives.

The authors explain that people make decisions based upon incentives – how people get what they want or need, especially when other people want or need the same thing.

The authors outline 3 types of incentives:

Economic incentives are straightforward – people choose to do something if it will make them money.

Moral incentives and social incentives may seem similar on the surface and there is a degree of overlap, but you can think of a moral incentive as doing something because you believe it is the right thing to do. This may or may not have a social aspect where people recognize that you have done the right thing and you get social credit for that.

Social incentives are choosing to do or not do something because you will be praised or criticized by your peers. The difference is that it may not be morally righteous. For example, someone may take narcotics to impress their peers but that would not be looked upon positively from a moral standpoint.

The authors give an example of standardized tests at high schools. These tests have two incentives. For teachers, they can get a pay rise if enough of their students do well. For the students, achieving good results gives them access to different and more difficult classes.

There is an incentive for the teachers to cheat on the tests, and the research shows that around 5% do cheat.

The third situation the pair of authors look at is how drug gangs essentially have franchises. They use the case of a man called JT in Chicago who makes over $100k per year selling crack cocaine. Similar to McDonald’s or other fast-food franchises, he employs his own staff and carries a lot of the costs and risks but he also has the advantage of using the name of the gang – The Black Disciples.

The incentives here are also interesting for the foot soldiers that he employs. They have a 25% chance of being killed while doing their job but JT does not have any problem either convincing those that work for him to keep working for him despite the danger or recruiting new people to fill the positions once on of his current employees has been murdered.

Chapter four is perhaps the most famous example from the Freakonomics series. The authors claim that the crime rate fell so dramatically in the 90s because of the introduction of Row vs Wade or legal abortion in 1973.

Chapter five looks to examine the nature versus nurture debate and how it impacts the development of a child. The pair claim that certain actions associated with development, such as taking children to museums, have very little impact. Whereas other factors such as the age of the parents when they have the children have a much larger impact on the outcomes of a child’s development.

The final chapter looks at the impact of a child’s name on their development and prospects in life. One study showed that when two CVs were sent for the same job application, a candidate with an identifiable or stereotypical black name was much less likely to get a reply than another candidate with an unidentifiable name.

Freakonomics is a series of stories that examine what happens when you apply economic analysis to a range of social issues to find the cause and the effect.

It conveys the power of social science as a tool for understanding the world around us better.

To do this, the authors examine the work of Steven D. Levitt. Levitt is an economist that graduated from Harvard and MIT and is currently a professor of economics at University of Chicago.

Levitt has published over 60 academic papers, and this work laid the foundation for what is discussed in Freakonomics.

Stephen J. Dubner was brought in to collaborate with Levitt on the book. Dubner was asked to interview Levitt for The New York Times Magazine and the two hit it off and ended up working together on Freakonomics.

They managed to combine Levitt’s interesting research of strange and interesting topics with Dubner’s gift for storytelling.

Dubner manages to break down some of the complicated thinking and terminology in Levitt’s work and break it down into simple terms so that it is easy for the layperson to understand without spoon-feeding people.

At times, the book goes into quite minute detail about the statistical techniques that were used to come to the findings that are presented within the books. It is generally accepted that these are valid techniques that have just not been applied to the case studies that were in this book before now.

Some of the subjects are quite serious. For example, Levitt claims that the introduction of legal abortion in 1973 is responsible for the extreme fall in crime seen in the USA in the 1990s.

What do readers say about Freakonomics?

Freakonomics takes standard economic and statistical principles and applies them to a number of social problems – mainly throughout the USA but also across the world.

Readers mentioned that they had often believed in straightforward cause and effect or hadn’t challenged conventional wisdom. For example, more police equates to less crime.

However, after reading this book they realize there is a myriad of reasons why things might happen and it is not always obvious or straightforward.

An anthology of interesting happenings

Readers mentioned that Freakonomics is a series of interesting observations on various topics from rising crime to sumo wrestling to standardized testing to drug dealers.

They said it is an anthology of interesting happenings with no clear overarching story tying it all together. As such, it doesn’t necessarily feel like one book but a series of individual stories.

However, others would argue that the thread that ties everything together is the author’s argument that economics is the study of incentives and that each example is a slight variation on the same theme.

Similarly, some readers claimed that the book was not about economics at all. They said that they felt the book was about showing what interesting things can happen when you apply statistical analysis to problems where you wouldn’t normally do so.

The author might agree with that summation but would probably argue that the application of statistical analysis to interesting problems IS economics.

Steven D. Levitt and Stephen J. Dubner have a disclaimer within the book that states Freakonomics is not a piece of scholarly writing.

Some readers felt like this caused them to question the integrity of the books and the findings within. Others said they felt like it was a copout where the work was not based on peer-reviewed studies but simply a hackneyed analysis.

While readers generally accepted that there was merit to at least some of the author’s claims, if not everything, they also said that they felt some of his findings are clearly BS.

The audiobook for Freakonomics: A Rogue Economist Explores the Hidden Side of Everything by Steven D. Levitt and Stephen J. Dubner is available on Audible.

It is 7 hours and 50 minutes long and is narrated by co-author Stephen J. Dubner.

Generally, feedback was positive for the narrator. As with many non-fiction books, there is added authenticity when the author narrates the book. However, it is slightly different in these circumstances as Dubner is narrating his writing about someone else’s work and research. So, although the added authenticity applies given that Dubner did write the book, it may have been stronger had Levitt narrated.

That being said, Dubner is an extremely competent narrator who was able to maintain the listener’s attention the majority of the time through some patches where the writing is a little dry. Some listeners did complain that there are sections where Dubner reads out long lists of names that could have been handled differently in the audiobook production than it was in the print book.

Similarly, the N-word is used in the book. Listeners mentioned it was disconcerting and uncomfortable to hear Dubner use the word so freely.

The final complaint from readers was the regular musical interludes in the production. They found the random music in the middle of the chapters to be strange and took them out of the performance.

Should I read Freakonomics?

Freakonomics will make you think more deeply about the way you understand the world.

Freakonomics has its downsides. The book is not a scholarly piece of work so its findings should be taken with a pinch of salt. However, it is a book that will challenge the way that you think will still be engaging and entertaining at the same time.