Summary: How to Win at the Sport of Business: If I Can Do It, You Can Do It by Mark Cuban 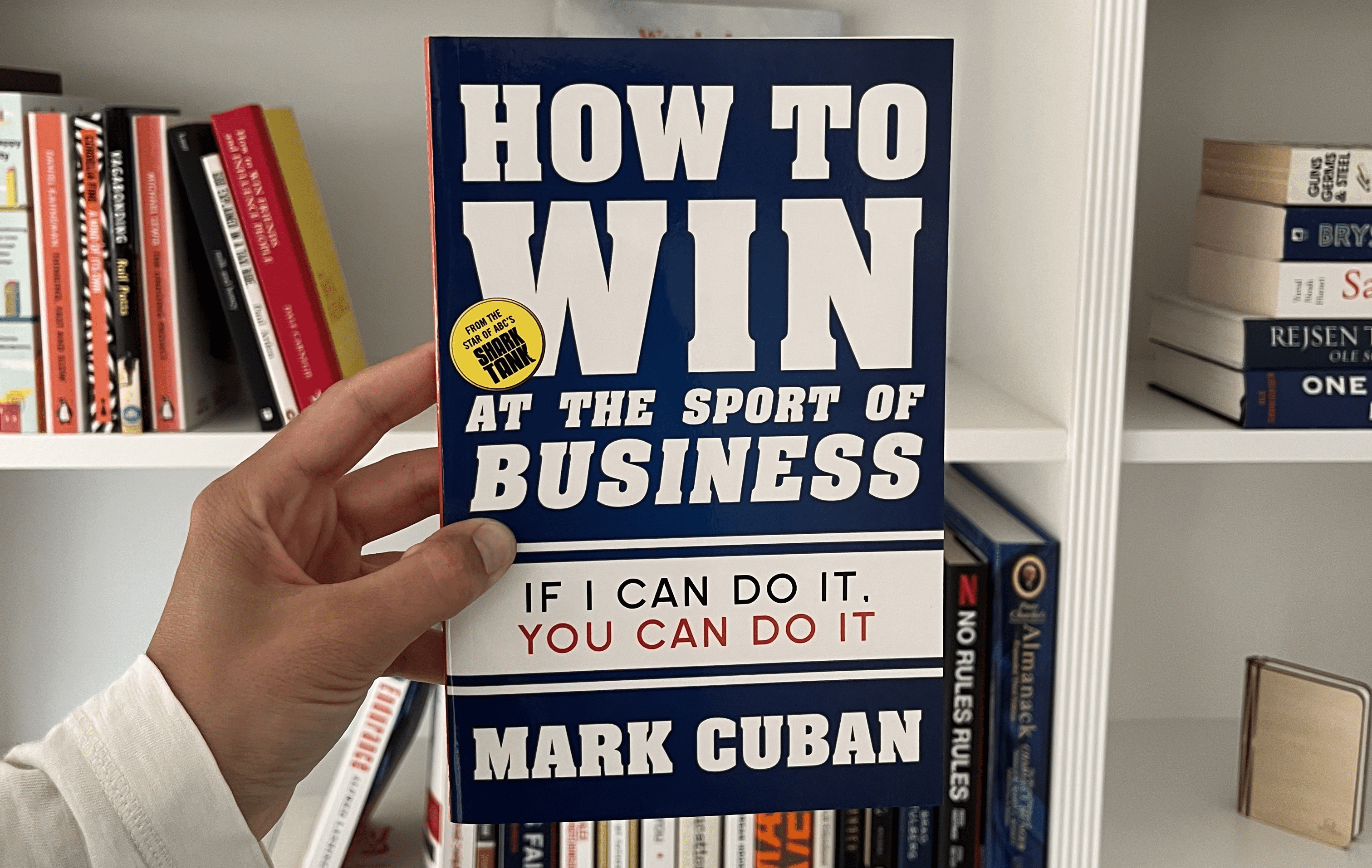 How to Win at the Sport of Business is a collection of Mark Cuban’s blog posts that have been edited and turned into a book.

The story follows Cuban from graduating to college, to bouncing from job to job, to getting fired and starting his own company, selling it, starting another business, and then selling that for billions.

Because the book is adapted from blog posts, the format can be pretty rigid in the form of “here’s a story from my past, and here’s what I learned from it” repeatedly. However, it’s a short, easy read packed with some interesting lessons that may challenge the way that you looked at things before.

Overall, it’s a book that has a high payoff for the amount of effort you need to put in to read it.

Mark Cuban’s “How to Win at the Sport of Business” is a short, sharp summary of some of the most important lessons Mark Cuban has learned throughout his business career. It gives an interesting insight into how Mark Cuban views the world, allowing you to understand him a little better. At the end of the book, you may find yourself adopting some of the philosophies that have led to Cuban becoming one of the sharks/ investors on the TV show Shark Tank and the owner of the Dallas Mavericks NBA franchise.

After graduating from college in Indiana, Cuban moved to Dallas and bounced from job to job. He eventually found some success in a role selling computer software. He earned enough money to move out of the 3-bed apartment he shared with 5 roommates into his own place.

However, while working this job, Cuban was conducting his own business on the side as a consultant. One day he decided to close a business deal rather than going to his work and opening up the shop for the day. Cuban was quickly fired.

Rather than look for another job, he realized he had enough experience to start his own business. He had studied hard and read a lot so that he could compete against experts in his field. The business was growing to the point where Cuban had go to the point where he had grown from someone with 5 roommates who didn’t even have his own bedroom to someone with $85,000 in the bank. Unfortunately, his secretary stole $83,000 and disappeared.

Cuban decided not to hold a grudge against the secretary that would eat away at him and distract him from his goals. Instead, he chose to carry on learning and growing his business.

The main lesson he learned from this experience was to not dwell on mistakes. Invest in yourself, keep growing, and move forward.

Cuban loves competition and views the world of business as the biggest competition of all. Where in sports there are set rules and ways to win, in business the possibilities are endless. He believe you have to put in the effort to always be smarter or better than your rivals. The only way that you will keep outworking your competitors is by having passion for your business.

That is one of the reasons that Cuban believes it’s important to own your business rather than sell a huge chunk to venture capitalists or investors. Cuban reasons, as soon as you sell out to investors then you are no longer in control. You are then playing their game. And they don’t care about your vision. All they care about is making their money back plus more.

Instead, Cuban believes that you should focus on growing slowly and sustainably. In the end, you will still own the majority of the business and you’ll be able to work on things you want to work on – do things that you want to do and achieve your original goals rather than sacrificing principles to make some quick cash.

After Cuban had sold his business to Yahoo! he bought an NBA franchise – the Dallas Mavericks. One day he was speaking to the General Manager of the team to find out more about a player’s situation. He asked the GM why he didn’t talk to the player about the issue. The GM said that a player trying to evaluate himself is the worst possible talent evaluator.

Cuban took this advice to heart. The same is for business people. It’s important not to lie to yourself. It’s a difficult relationship because as a business person you need to have confidence. But confidence can blind you to your own weaknesses. You can develop an ego where you start blaming other things for things that go wrong – there’s always an excuse. However, Cuban says that in order to have success you have to be honest with yourself.

Cuban freely admits that organization is not his strong point. He has people that organize his life for him. When you find a weakness like this, it doesn’t always mean that you have to work as hard as possible to become the most organized person in the world. Rather, you can hire people or put systems in place that can compensate for your weaknesses.

One thing that many people may think is a weakness of Cuban’s is that he is a whiner. He whined when he was in high school and wasn’t allowed to access certain classes. He whined in college when the classes weren’t challenging enough. And he whined in his sales job when he was told to do menial tasks like organizing the office.

But Cuban had both a reason and a solution for the things he was moaning about in each of these cases. Whining is simply identifying problems. And identifying a problem is the first step toward fixing it.

Cuban’s book draws on his experiences throughout his career in business and summarizes them in a short but insightful book.

The tone of How to Win at the Sport of Business

How to Win at the Sport of Business is a tour of Mark Cuban’s mind. As such, the tone is thoughtful and reflective.

Cuban is known for being big, loud, and brash. If that is something that you admire about Cuban, you will come out of this book admiring him even more. However, if you find Cuban to be overpowering or somewhat gauche, then this book will not do anything to disabuse you of that notion.

The author’s personality shines through this book. At times this can come across as arrogant. But there are also moments where Cuban comes across as more humble and reflective.

Given the nature of the book being adapted from blog posts, the format can be a bit stilted. But if you go into reading the book with this knowledge, then you will see that it flows surprisingly well.

What type of reader would enjoy the book?

This is a business book for business people.

It touches on motivation and inspiration at times, but it also gives some important practical advice as well as the less tangible stuff.

Cuban talks from experience and that shows, to paraphrase:

All of these pieces of advice may sound simple, but when paired with the context Cuban’s experiences provide then the messages are really driven home.

How to Win at the Sport of business is quite a short book and an easy read. For those who have just read something long, dense, and difficult to digest, this could prove to be a nice, light, easy-to-consume alternative to give you a break before going on to another dense title. However, just because it is not long, it does not mean that there are not important lessons that can be learned throughout the book.

What do readers say about the author?

Mark Cuban has become extremely famous since becoming the owner of an NBA team and appearing on Shark Tank. Many people, therefore, already have a strong opinion on him.

One of these opinions is that he is arrogant. A number of readers have suggested that he came across as arrogant throughout the course of the book.

At the other end of the spectrum, som readers suggested that with the light-hearted and breezy style the book is written in, Mark Cuban comes across as humble and likeable. Within the book, Cuban admits to a number of mistakes, recognizes that he was fortunate to be in the position he ended up in – there was a degree of luck along with all of the hard work.

Many readers commented that Mark Cuban is a good salesperson. In the book, he describes the work he puts in to make and maintain relationships with potential customers. As part of his competitive streak, he views every hour of the day as an opportunity to make appointments with people he can sell to.

This book won’t change your opinion

A single reader put it best, saying that if you thought Cuban was aloof and arrogant going into the book, your mind won’t be changed. However, if you liked Cuban’s style, then you are likely to come away from this book with your opinion enhanced – just not changed.

What do readers say about How to Win at the Sport of Business?

How to Win at the Sport of business is a quick and easy read. Many readers suggested that they sat down and consumed it all in one sitting – taking around 3 hours.

For the output of 3 hours of time, many readers suggested that you can take a lot away from it. There are a lot of lessons to be learned, and Cuban manages to tell them concisely and to the point. There is no fluff and no BS.

Once you know that the story is adapted from blog posts, many of the readers commented that it flows reasonably well given the circumstances but when it’s competing with other business biographies it leaves the readers with a disjointed experience.

Should be expanded into a full book

Many readers were thinking that this book was a moneygrab. They believe Mark Cuban to be a business man with important lessons to share and would like to read an autobiography written as an autobiography rather than lessons adapted from a blog.

To that ends, there were multiple suggestions that How to Win at the Sport of Business should be transformed into a full length book.

The audiobook on Audible has a running time of 2 hours and 8 minutes. So a lot of people were disappointed at how short the book is.

However, in general, the feedback is that it was a very valuable listen with a lot of return on investment for the amount of time put into listening to it. There is no filler content.

Many people commented wishing that Mark Cuban had narrated the book himself due to his engaging personality. But, the narrator was deemed to have done a good job, to have held the reader’s attention, and to have been engaging.

Should you read How to Win at the Sport of Business?

How to Win at the Sport of Business is a short and easy read. It can easily be consumed in one sitting. For business people, it is worth reading as you are able to take a lot away for a minimal amount of effort.