Summary: I Invented the Modern Age: The Rise of Henry Ford by Richard Snow 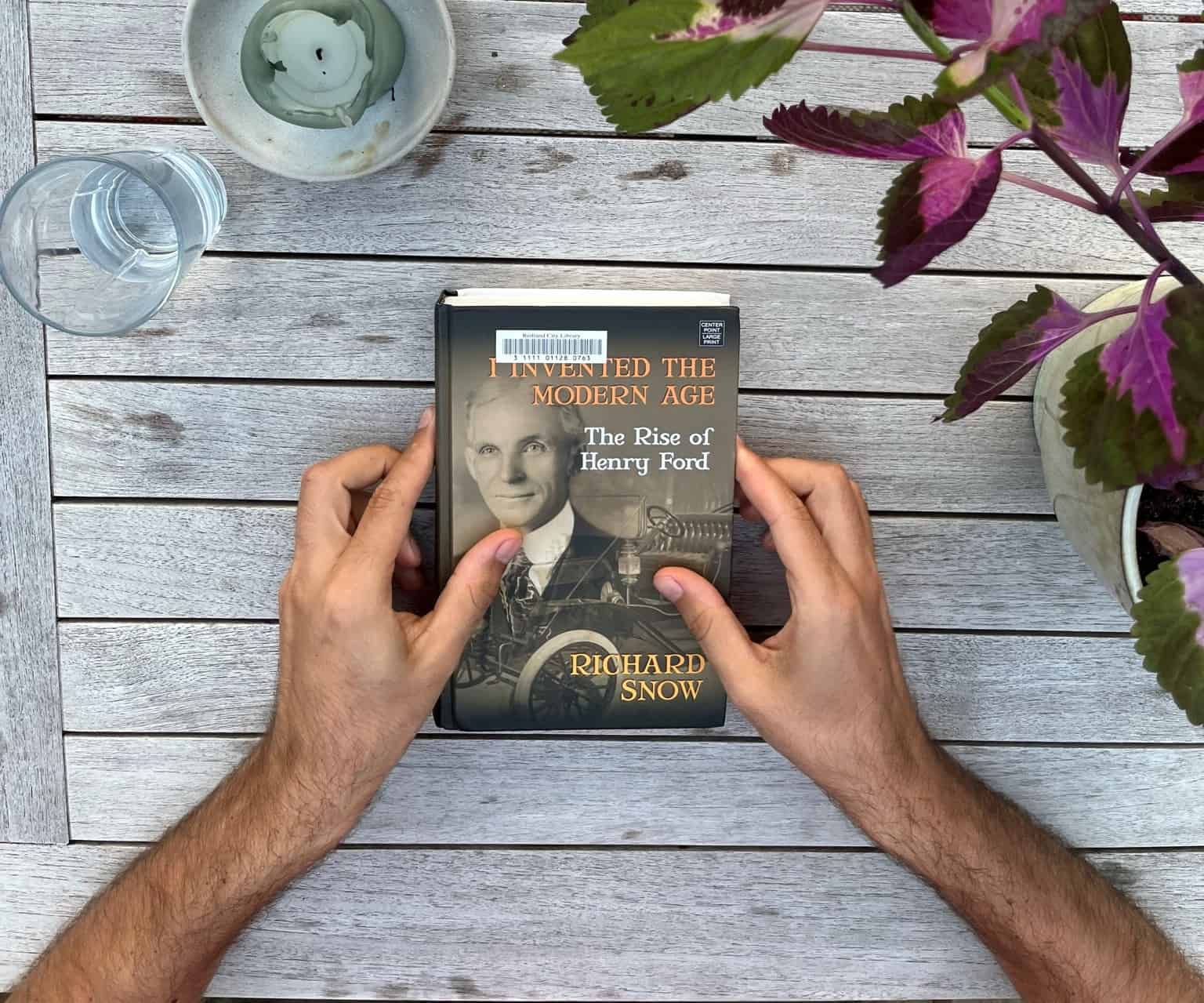 Richard Snow documents the life of one of the greatest inventors of the modern world, Henry Ford. From his early childhood to his death, the book’s main focus is on the period of around 30 years, from 1896 to 1927, a period during which Ford constructed and started manufacturing the Model T, which transformed the automobile industry and the industry overall and made Ford one of the prominent figures in the history of the mankind.

“I Invented the Modern Age” is a story about the life of Henry Ford, with a special focus on the most significant and prosperous period of his life – the foundation of the Ford Motor Company and the manufacturing of Model T, one of the most iconic and significant automobiles in the history of cars.

The book is divided into 17 chapters, followed by the epilogue. The book mostly follows a chronological structure, starting with Ford’s childhood and ending with his death at the age of 83.

From Snow’s records on Ford’s childhood, readers can get an insight into how early he developed a fascination with engines and mechanics. Growing up in a family that had a farm, Ford was never interested in his family’s business and would always try to find any way to skip his duties or to figure out the way to find a shortcut.

On the other hand, Ford was always extremely curious about the mechanics of how things work, often dissembling and reassembling toys, watches, engines, or any other mechanical things. Farm life couldn’t hold Ford for very long, and he moved to Detroit when he was 16 years old to find the best job that would enable him to utilize his craftiness and mechanical ingenuity.

Ford became well known for his ingenuity, with the drive and passion for improving and leaving a mark in the US industry. When he built the first gasoline engine, he used industrial scraps, and  it was the size of a sewing machine. Step by step, he quickly gained knowledge through several jobs and was able to attract investors who were willing to bet on him.

The main focus of the book is a period during which Ford was raised from a man building his quadricycle in the woodshed in his backyard to a person that genuinely transformed and revolutionized the American automobile industry. During this period, special attention was paid to the legendary Model T, which changed how human beings commute while introducing production lines and making cars affordable to the average citizen.

The book also details some of the revolutionary innovations in how factory workers are treated and paid, like introducing a $5 workday, which at the time was double the amount of the average wage, progress in women’s rights, and hiring thousands of African-Americans, etc.

The author also included the “dark” side of Ford’s life and personality, and readers can see how his mind and behavior shift as he gets older and wealthier. Some of the examples include this relationship with his employees and close associates and how he treated them in the later stages of his career, sending thugs to terrorize and discipline workers. The topic of Ford’s anti-Semitism is also covered in the book.

On the business end of things, Ford became increasingly opposed to changes and modernization, and his inability to innovate and adapt to new trends in the industry cost him greatly, as his company lost the unmatched power it possessed with the success of Model T. This stage of his life is best described with the quote Ford said to his alleged illegitimate son when he argued that the company needs to modernize. Ford’s replica was “Young man, I invented the modern age.”

The book follows the life of Henry Ford from his birth to death. However, a special focus is on the most successful period of his life, the founding and rise of the Ford Motor Company. Readers will be able to get an in-depth understanding of how Ford constructed and organized the manufacturing of one of the world’s most important and successful automobiles, the Model T.

Through this story, people will also gain knowledge of all the innovations that this process brought with it, including the use of production lines, making cars affordable and available to the average US citizen, and some improvements in workers’ rights and overall quality of life. The book also describes the rise of the automobile industry and how it changed the way people live their lives.

Along with the ins and outs of the industry, readers can find out how Ford conducted his business, how he felt about banks, investors, and shareholders, and how he did everything in his power not to deal with them. As years went by, people also gained insight into how he changed his mentality and became cold, distant, and untrustworthy.

“I Invented the Modern Age” is a biography of Henry Ford told from the third person perspective. Regardless of the sympathies that the readers have for this book or the lack of them, they all agree that Richard Snow’s book is heavy on technical terms, considering that the main focus of the book was the design and manufacturing of Ford’s iconic Model T.

The book can essentially be broken down into 2 different parts – the one that tells the story of Henry Ford’s personal life and the one where the author details an in-depth look into how car manufacturing worked at the dawn of the 20th century.

Since the main focus of the book is on the creation and rise of Model T, Snow deploys long sentences and writes heavily on technical/mechanical aspects of the automobile. He uses lots of parenthetical comments, often long, and some readers found this rather annoying and threw them off the momentum.

Another technical aspect that some readers felt was overused and interrupted the flow of their read was the frequent use of source references within the body of text rather than in a reference section.

Snow also doesn’t use a straightforward narrative and sometimes digresses into stories that are only tangentially related to Henry Ford. This also resulted in some readers losing interest in the book and interrupting the flow of their read.

This biography offers readers a variety of topics to enjoy. As an inventor and engineer, Ford was one of the most impactful and successful engineers in the history of human civilization, and this book offers some detailed information on how Ford managed to transform the manufacturing process, which people even slightly interested in engineering can appreciate.

Snow also made sure that Ford was presented to the reader as honestly as possible, which includes records and testimonials of his mistakes and wrongdoings. This includes Ford’s personal and professional life, and these two often intertwine in the book. However, readers interested in entrepreneurship can undoubtedly gain a lot from reading how one of the most successful people in the world at the moment failed to sustain and build more on his success due to bad business decisions.

As a historical record, this book covers one of the most exciting periods in the history of the United States and basically explains how the modern age arrived and how people’s lives changed with the introduction of the massive production of automobiles. People will also gain insight into what the lives of their predecessors looked like before the emergence of the gasoline engine and Ford’s utilization of the production line.

How well does “I invented the modern age” compare with other titles in this field?

“I invented the modern age” is not the only biography of Henry Ford available to readers. Depending on the readers’ preference and what aspect of Ford’s life and career they’re interested in, this book can be among the first or the last choices.

“Ford: The Men and the Machine” by Robert Lacey provides more detailed insight into the private life of Henry Ford and the complexity of his personality. It contains fewer technical details  on the manufacturing process and the ins and outs of car design than “I Invented the Modern Age.”

Another biography of Ford, “Wheels for the World” by Douglas Brinkley, is specifically focused on the rise and glory days of Ford’s automobile company, spanning from its founding, early success with Model T, to modern-day od Mustang and Taurus. This book provides fewer details on Ford’s personal life than the abovementioned titles.

“Fordlandia: The Rise and Fall of Henry Ford’s Forgotten Jungle City” by Greg Grandin tells a fascinating story of Ford’s attempt to build and sustain an American-type city in the middle of the Amazon rainforest. This business venture of Ford’s is not discussed in detail in “I Invented the Modern Age.”

The audiobook version of “I Invented the Modern Age” runs for 12 hours and 18 minutes and is narrated by Sean Runnette. Listeners liked Runnette’s voice and intonation, often mentioning that his pronunciation and tone realistically depict how people talked at the dawn of the 20th century.

On the other hand, listeners were somewhat thrown off by the book’s structure, as Snow utilized lots of long sentences with additional explanations and source references in the body of the text. This, combined with the frequent shifts in the timeline, made this read difficult for some listeners.

What do readers say about “I Invented the Modern Age”?

Readers are happy with the way Snow portrays Ford in this book and appreciate the fact that the author made sure to present both sides of Ford’s personality. The book describes Ford’s manipulation of shareholders in order to gain a larger share in the company, mistreatment of his only “legitimate” son Edsel, anti-Semitic campaigns in the newspapers he financed, alleged affairs, etc.

The fact that the author made sure that Ford is presented as realistically as possible, thus making this book a stereotypical “hero’s journey,” suited well with the readers, who feel like Snow perfectly balanced Ford’s good and bad sides and actions.

Heavy on technical and mechanical details on cars

Some of the readers thought that the book was filled with terms and details that were not very understandable to people not familiar with how the automobile operates. While this benefited all the car aficionados and people interested in engineering and the history of mass manufacturing, others found it hard to understand and follow.

As he was getting older, Ford faced an evident shift in his mindset and personality. He became more resistant to change and modernization and less trustworthy to people, even the ones closest to him. He has come a long way from being a charismatic, highly likable character that attracted the attention of employers and investors.

Readers found this transformation fascinating and praised the way Snow was able to display it. They appreciated the fact that the author didn’t shy away from sharing all the dark sides of Ford’s life.