Summary: Lost and Founder: A Painfully Honest Field Guide to the Startup World by Rand Fishkin 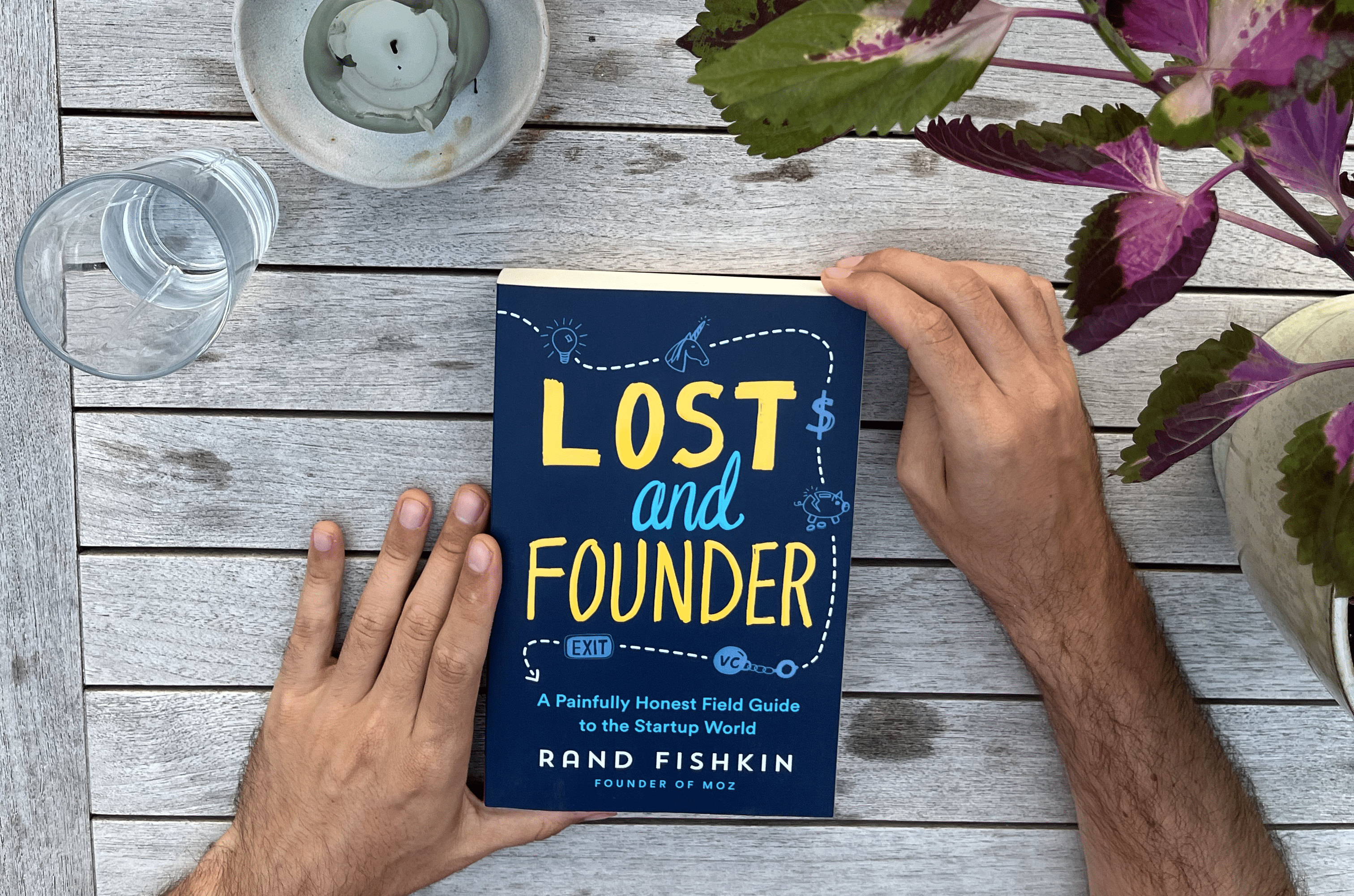 Lost and Founder is a raw, brutally honest post-mortem of a man’s struggle within the system of Silicon Valley. It’s a practical guide to building a start-up based on one man’s real-life experience.

It’s a fascinating read for any founder or anyone interested in real, human stories within the context of Silicon Valley with some practical business tips thrown in for good measure.

Lost and Founder is the story of Rand Fishkin, founder and former CEO of Moz.

The book describes the more realistic side of being a start-up founder. One where the business doesn’t explode and make the founder a billionaire. Instead, Lost and Founder tells the story of a start-up that took 15 years and a lot of debt to build, that became successful, and then eventually didn’t.

This brutally honest account by Fishkin is a human story of what a start-up founder goes through as well as a tactical guide to tackle many of the scenarios he found himself in – especially when it comes to dealing with raising capital and managing investors.

Start and Founder will arm founders with more realistic expectations and the grit required to face the challenges that Fishkin explains founders will face in this book. It explains the journey from struggling startup to a successful business with $45 million annual revenue, and strong growth. Fishkin discusses passing up an opportunity to get bought out by a larger company. Then goes on to explain the rise in competition, the stagnation of growth, and demands from investors that ultimately led to him and the company heading in different directions.

Lost and Founder is a must-read for anyone considering taking on investors, starting a tech start-up, or anyone interested in real, raw, human stories within a business context.

Fishkin is a good writer with plenty of experience given his experience writing blogs.

His writing style is conversational and light. This is surprising as Fishkin tackles a lot of very troubling and personal issues throughout the book but still manages to make it feel comfortable for the reader.

Throughout, the reader can feel Fishkin’s emotions even if these are not always pleasant. At times he can come across as being bitter about his experience. He speaks about certain people throughout the book in a way that many would feel is distasteful or at least would come to regret later but that is his prerogative as the author.

On the whole, the book is full of openness, honesty, and transparency that will make founders feel a little less alone in their business problems.

Who should read Lost and Founder?

Lost and Founder is radically transparent. What that means is Rand Fishkin is totally open about his thought process, why he made certain decisions and his finances throughout the book.

He talks about both the finances of the business and his own personal finances. How founders often don’t make a lot of money for themselves from a start-up if they have gotten investment.

He goes into the pros and cons (mainly cons from his perspective) of funding, what problems it caused him and how to manage investors.

There are some very specific scenarios that many startup founders will face, Fishkin takes the reader through them, discusses what he did, why he did it, and what he would do differently looking back with hindsight. It’s a fascinating post-mortem of his time at Moz that will give founders a heads-up on what they can expect so that not everything is brand new and unexpected.

Anyone working in a SAAS business

Moz is a tool that allows search marketing professionals to do their job better. Fishkin and Moz sell subscriptions to the tool in a software-as-a-service model.

Reading this book will help anyone working in a SAAS business to understand the business model better, the pitfalls of listening to certain well-established Silicon Valley advice (such as launching a minimum viable product) and the struggles that your CEO is going through.

At one point, Fishkin discusses upcoming layoffs and the scenario that plays out months in advance leading up to these layoffs. For anyone employed in a SAAS business, this section, in particular, is eye-opening.

Anyone who enjoys human stories in a business context

Lost and Founder is a man bearing his soul. At times it feels like this is therapy for Fishkin to help him get over a harrowing experience.

However, his honesty and vulnerability make this a compelling story. Add that Fishkin is a genuinely good storyteller into the mix and you have a well rounded book that is part business, but deeply personal.

At times, Fishkin goes into too much detail explaining the intricacies of the business that can slow the book down a little, so it is important to have some interest in business before reading the book.

What do readers say about Lost and Founder?

Rand Fishkin is brutally honest throughout Lost and Founder.

The book tells the story of what he learned over the course of 16 years at Moz. When telling the story, Fishkin uses real names and real numbers. He lays out the financial situation at Moz, what the investors put in, what they want in return, and what they want back. He also lays out his own finances during this period.

Readers say his honesty was disarming. It made it difficult to put down as Fishkin was talking about some of the most difficult periods of his life and the most difficult decisions he had to make in his life in such a raw way. He also discussed some very personal issues such as his battle with depression. At times, the honesty could be painful to read. He not only discusses what he did well, but he goes into more detail about the things he got wrong. At times, Fishkin made unhealthy decisions and these are covered at length.

Fishkin has strong opinions and he isn’t afraid to share them. Given his experience, he is very well placed to give advice on startups, funding, investors, etc. but at times it feels as though he has been blinkered by his bad experiences.

Throughout the book, it feels as though Fishkin completely writes off the value of venture funding because of his own experience. However, many of the readers felt this was unfair and venture funding still has a place.

Readers also mentioned that they found the way that Fishkin discussed some of the people he came across in Silicon Valley as distasteful. They felt that Fishkin blamed Silicon Valley culture for a lot of what when wrong with Moz, and this bias clouded his judgment.

However, the charm of this book is the honesty and the explanations of Fishkin’s thought processes and his perspective. Looking at it from that angle, this bias actually added to the book for many rather than taking away from it.

Fishkin also explains his struggles with mental health. When accepting venture funding, there is an expectation of a minimum 10% growth year on year. This puts a lot of pressure on a founder and a CEO. He has to keep finding ways to feed the beast when it is only sustainable for so long. Tackling this alone is taxing. The book shows that startup life is not all rosy and billion-dollar deals but often a difficult, lonely place wrought with failure.

Practical and transparent guide to building a startup

There is lots of great advice throughout Lost and Founder. In fact, readers felt it was like a post-mortem of his time at Moz with the benefit of hindsight. It’s not a business textbook or theory – it’s a real hands-on book based on real-life experiences and outcomes.

Fishkin gives a lot of tactical advice on how to deal with situations he has faced in time as a CEO.

For example, he goes into detail about MVP (Minimum Viable Product.) This is where you create the most basic version of a product that serves a function, release it to the public to start generating revenue then gradually improve it over time.

Fishkin explains how this doesn’t always work in the real world – especially for a SAAS business – as if users have a bad experience with your tool, they are unlikely to hang around for it to get better. At this point, he discusses The Lean Startup and acknowledges advice from other business books and his take on it.

He is also able to highlight the responsibilities and hidden challenges that a founder and CEO has. Unfortunately, a CEO does not just get the opportunity to focus on their product at all times. They have to worry about raising capital, managing investors, cash flow, hiring, culture, sustainable growth, and fulfilling the needs of existing customers. There’s a lot for them to cover, some of which is obvious, other stuff – not so much.

The most interesting part of this is the concept of radical honesty and how much to share with employees. If things aren’t going well, do you tell them that they are to keep morale high, or do you give them a warning that if things don’t improve there are going to have to be cost-cutting measures? It’s a difficult balancing act about how much to share and when.

Fishkin rails against the fake it until you make it mentality in Silicon Valley and talks about investors. Fishkin’s advice is if you want money from an investor, ask for help. If you want help, ask for money. He gives the impression that it is all one big game for some people. While for others it is real life, with real-world implications. Not all parties involved understand this.

Some feedback on the book was that it felt unfinished. The book ends rather unsatisfyingly but readers acknowledge that this is also an important part of the story.

The story is unsatisfying. It doesn’t have the happy ending where Google comes in and buys the company for $10 billion. In the end, competitors catch up with Moz, growth slows and Fishkin leaves the company to start something new.

The main complaint that readers have with the book is that Fishkin seems bitter. It’s clear that he has been through a lot, and that it has potentially even been a traumatic experience for him.

However, Fishkin talks negatively about a number of figures in Silicon Valley, the culture, and seems to really regret not taking a lucrative buyout offer before things started to go wrong for Moz.

You can really feel his raw emotion throughout, and it is a sobering take on the many landmines facing founders in Silicon Valley but some readers found the way he spoke unbecoming of such a figure.

The audiobook has 4.8 out of 5.0 on Audible for both the performance and the story.

Rand Fishkin narrates the audiobook himself. This adds authenticity to the stories told throughout that would have been difficult to achieve from an actor. Although Fishkin is not a trained actor, he is charismatic and his performance manages to keep the attention of the audience.

One drawback is the technical language and acronyms used within the book that is not expanded upon or explained. This can be more difficult when listening to an audiobook than reading a physical book as the listener does not have the same opportunity to stop and look it up on Google.

Should I read Lost and Founder?

Yes, Lost and Founder is a fascinating, detailed insight into life at a start-up. It’s a complex and rich human story within the context of the business world.

The book is particularly suited to founders, CEOs and anyone working in the world of SAAS. However, I believe that almost anyone with a passing interest in business would enjoy this book.