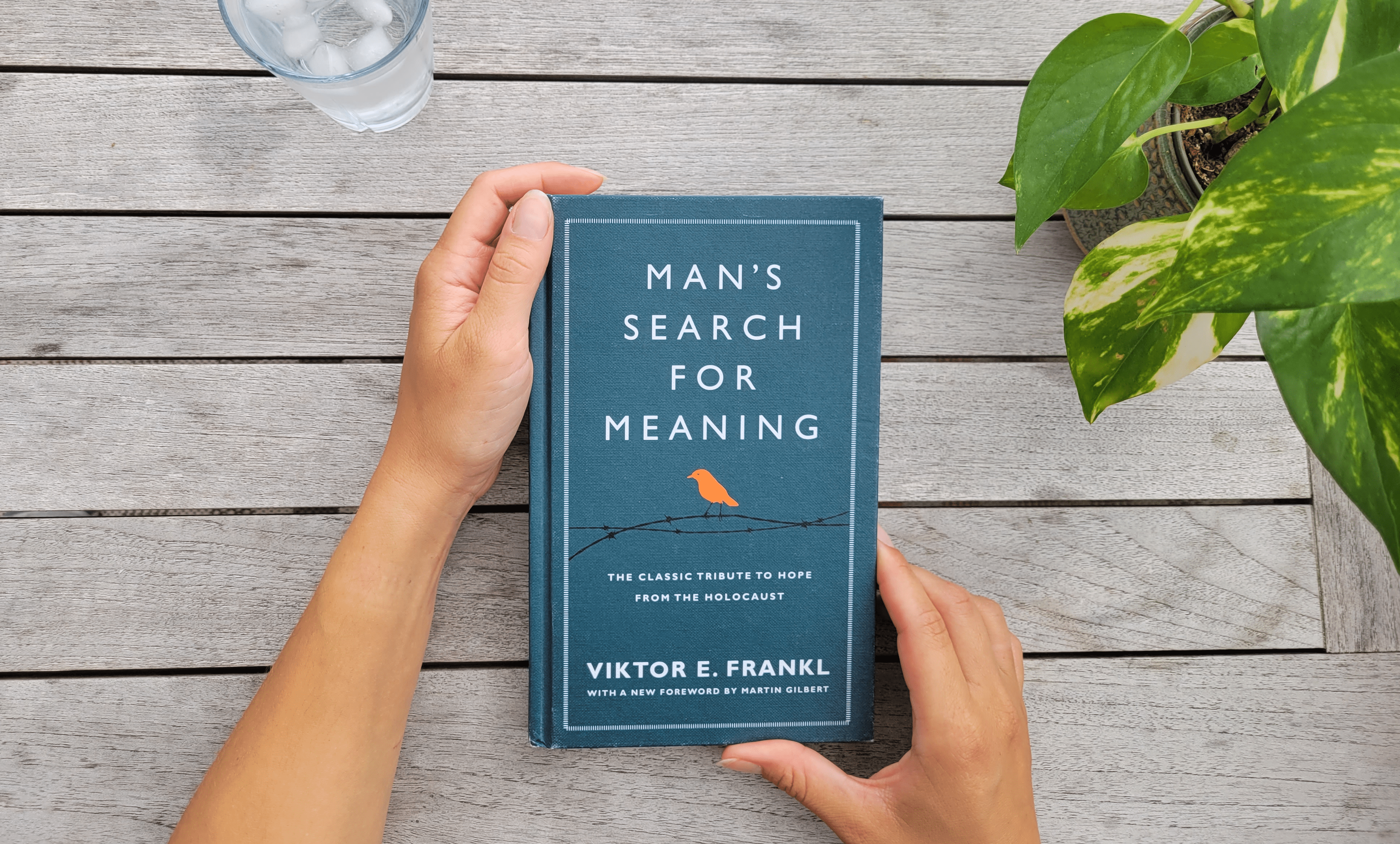 Man’s Search for Meaning is a book by Victor E. Frankl that explains the experiences of Frankl and other inmates at Nazi concentration camps throughout World War II.

Frankl describes the mundane everyday experiences of the concentration camp rather than writing a heartfelt memoir. He then analyzes these experiences to explain the impact they have on an inmate’s mental health.

The main premise of A Man’s Search for Meaning is that in order to thrive, a person needs to both find their main purpose in life and work towards that but also to find purpose in the small and mundane things.

This is an interesting read for anyone looking to better understand the harrowing experiences that inmates suffered in Nazi concentration camps during World War II but it is interlaced with a lot of psychology and theory that not everyone will find interesting.

Man’s Search for Meaning is often described as the memoirs of psychotherapist Victor E. Frankl describing his experiences in Nazi concentration camps throughout the Holocaust and World War II.

However, Man’s Search for Meaning isn’t a memoir. It does touch on his own experiences at Theresienstadt and Auschwitz, but only when he can use those experiences as examples to illustrate one of his theories.

Instead, Man’s Search for Meaning is an examination of his psychotherapeutic method called Logotherapy told through the behavior of himself and fellow inmates within the Nazi concentration camps.

The book is split into two distinct parts. Part one covers Frankl’s and his fellow prisoners’ experiences within the camp, along with an analysis of the behavior.

The book essentially tries to answer the question of how everyday life in the concentration camps was reflected in the mind of the average prisoner.

In part one, Frankl states that there were three states that all prisoners went through at some point to varying degrees.

Upon admission, the prisoners went into a state of shock. They retreated into a shell and struggled to comprehend what was happening to them and their families. This continued until the prisoners became used to life at the camp.

At this point, apathy set in. Frankl states that after becoming accustomed to life in the camp, and the cruelty of the day-to-day, inmates were able to cope by only concentrating and caring about things that may help them, their families, and their friends survive. It seems like at this point that Frankl is suggesting that any collective sense of struggle has gone and the prisoners were only caring about themselves.

This is considered a problematic view by many as it implies that Jewish people were docile or did not put up any resistance to what happened to them during the holocaust where this was not the case.

Frankl also suggests that a person has the choice about how to react in the face of unimaginable treatment in the concentration camps. He ties a person’s reaction to their chances of survival. This has also come in for criticism as it implies that a number of Jewish people in the camps simply gave up. However, there were clearly structural forces in place that meant regardless of how much hope a person had or how much a person has to live for that they were not in control of their own situation.

When released, Frankl states that people suffered from depersonalization. This essentially means they felt disillusionment and bitterness. Once released, the prisoners felt numb. There was a readjustment to the real world. It was as if the prisoners did not comprehend that they were free or remember what it really was like to be free.

Frankl suggested it was like a dream and the freed prisoners felt as though their freedom could be taken away from them at any moment.

Even simple pleasures such as seeing and smelling flowers seemed unreal – or surreal. It was impossible to take any pleasure in these small things.

Once out, the body and mind once again went into a state of shock. Frankl’s analysis indicates that the body began to withdraw from this state of shock well before the mind. Initially, the body wanted sleep and plenty of food to recover. Once the body had recovered to a certain extent, then the mind could begin to break out of its state of shock and the prisoners would begin to feel slightly less numb.

In the second part of the book, Frankl describes his psychotherapeutic method called Logotherapy.

Frankl believes that there was a huge mental release of pressure when someone is liberated from the concentration camps but this release in itself can be dangerous. He compares it to a diver being released from a hyperbaric chamber.

He talks of a lack of bitterness about the lack of responsiveness from the outside world to what the Jews suffered through.

However, he states what was hardest to get over was a sense of disillusionment. Throughout Frankl’s time in the concentration camps, he was able to maintain his positive attitude – or at least avoid apathy – by focusing on the meaning of his life, what was important to him. This included his work on Logotherapy but it mainly revolved around the love he had for his family and the thought of his wife waiting for him when he got out.

This is where Frankl goes on to talk about a sense of detachment. Essentially, he felt like the worst things that could possibly happen had already happened to him and his family.

He had nothing left to fear but his god.

Who should read Man’s Search for Meaning?

Those going through tough times

Man’s Search for Meaning is about how Frankl managed to use the thought of being reunited with his family to push through the toughest situation that anyone can possibly imagine.

For anyone going through tough times of their own – be that financial, illness, or something else – this book can help provide some perspective. It can also act as a guide to finding some meaning in the situation you are struggling with at the moment and finding the resolve to push through to the other side – whatever that means to you.

People with an interest in the struggles of the concentration camps

The book gives an overview of the situation that Frankl and his fellow inmates faced during their time in the Nazi concentration camps of World War II.

The narrative is intense, gripping, powerful, and unimaginable. The way Frankl tells the story of his time there is as inspiring as it is horrifying and Frankl manages to tell the story with the gravity that it deserves.

Throughout Man’s Search for Meaning, Victor E. Frankl does not give a chronological account of what happened to him and his family during World War II, how he was placed in the camps, what happened at the camps, his own feelings, and experiences, and what happened when he was liberated from the camp.

In fact, Frankl only goes into detail about his own thoughts and experiences when it is convenient to make a wider point about his method of Logotherapy.

As such, it’s not an easy read. It gives an insight into what life really was like every day in the concentration camps that you do not often get from elsewhere with a dispassionate look at what people had to go through. Usually, in memoirs of concentration camp survivors you will see a more over-arching narrative rather than the dispassionate detail we see in Man’s Search for Meaning.

What do readers say about Man’s Search for Meaning?

Helps you find a purpose in life

Many readers state that if Frankl was able to find a purpose under such trying circumstances that it gave them the inspiration to find their own purpose.

However, Man’s Search for Meaning is not just about taking Frankl’s experiences and applying them to your own life. In the second half of the book, Frankl goes into detail about his methodology which many of the readers enjoyed – especially if they were aware that’s what they were going to get before reading the book.

Those who did not understand the concept and thought they were getting a memoir about a man’s experience in the concentration camps were left confused by the second half of the book.

Readers mentioned that they felt confused while reading the book. Although there is a degree of narrative to the book, it is full of statistics, technical terms, and difficult-to-understand concepts.

Although many people recognize that Frankl did not intend to add fuel to the fire of the narrative that Jewish people were docile and did not put up any resistance to their fate of being sent to the camps and the gas chambers, they say that this book ultimately does add to that narrative.

There is a phrase “like sheep to the slaughter” that essentially blames the victims of the holocaust for the fate that they suffered by saying they did not do enough to fight back. Many argue that Frankl’s book feeds that narrative.

Should I read Man’s Search for Meaning?

Man’s Search for Meaning has been a life-changing read for some people but it feels as though for the majority of readers that it is two books in one that should not be put together. The first half of the book where Frankl describes the daily struggles of the concentration camps is widely interesting.

However, the second half of the book where Frankl goes into the details of Logotherapy has too much technical information and jargon for most people.