Summary – No Rules Rules: Netflix and the Culture of Reinvention by Erin Meyer and Reed Hastings 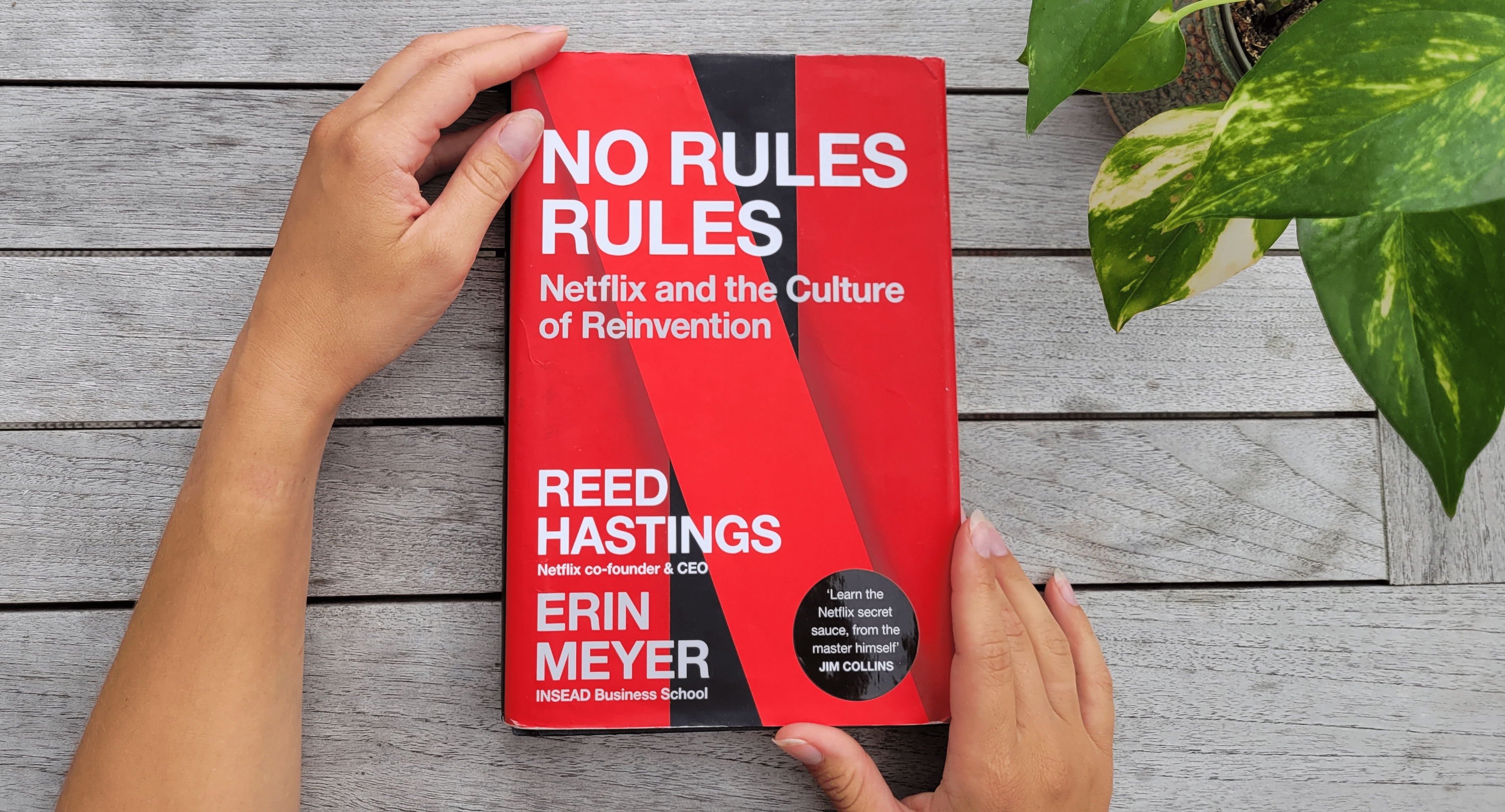 No Rules Rules: Netflix and the Culture of Reinvention by Erin Meyer and Reed Hastings puts into print the key principles that Netflix used to re-invent itself numerous times and turn itself into a recognized brand all around the world.

The dual authors work well. Meyer acts as a kind of fact checker on the declarations that Hastings makes.

You may not agree with all of the principles that Hastings lays out in the book, but it’s a fascinating insight for anyone involved in managing people which means this book really is worth reading.

Reed Hastings and Erin Meyer examine the 10 major principles that the culture of Netflix is built on in No Rules Rules: Netflix and the Culture of Reinvention.

The main concepts that Hastings and Meyer cover in the book are:

The idea is that by hiring the best possible people, only keeping the highest performing employees, and allowing them to be completely honest with each other and make their own decisions you create a tight group of employees with the skills and authority to allow Netflix to keep adapting, innovating and growing at a much faster rate than competitors.

No Rules Rules: Netflix and the Culture of Reinvention is very different from many other management books because it is written by Reed Hastings AND Erin Meyer.

In her own right, Meyer is recognized as one of the leading minds on corporate culture. She has written a bestselling book called The Culture Map where she goes into detail about the global workforce, and how to understand different cultures in a working environment. Meyer is also a professor at INSEAD business school in Paris.

These books usually work with the CEO making grad declarations and the reader simply having to take them at face value. That isn’t the case with No Rules Rules: Netflix and the Culture of Reinvention. Hastings does indeed make grand declarations. But Meyer’s role as a co-author is to go interview hundreds of Netflix current and former employees to find out if what Hastings is saying is actually reflective of their perspective of what was/ is going on within the company at the time.

It’s an interesting dynamic where there are two narratives and two perspectives throughout the book. It is not “ghostwritten” or “as told to” Erin Meyer but simply two different perspectives of the same thing in the same book. One perspective is Reed Hastings which is informed by his experience as the CEO and all the biases that are involved in that. The other perspective is that of current and former Netflix employees as told to Meyer and her interpretation of what she has been told by Hastings on one hand and the employees on the other.

This method makes everything feel more authentic. Meyer plays the role of fact-checker and investigative journalist who is looking to get to the bottom of how accurate Hastings’s perception of Netlix’s culture is. An extra layer of authenticity is added due to the interviews that take place with former employees that did not fit into the Netflix culture and who are able to provide a more balanced opinion than the current employees who might not want to upset their boss so publicly.

However, as someone reads the book, it is possible that they will find the culture harsh, and despite the results perhaps justifying the methods, think that things should have been done differently. Meyer can be slightly criticized at this point as she could have pushed further into the negative aspects of the culture.

Who should read No Rules Rules?

If you manage or lead a team this book will give you something to think about. Throughout it there are so many interesting and completely different ways that Netflix does things from most established organizations that you may be shocked.

It is not a management bible. You will not read this book and immediately think that you need to implement everything that Netflix does within your own company. But, it will cause you to start questioning how things are done and if there are ways to either give your employees more responsibility, more autonomy, more freedom, or simply be less picky with minor issues like breaks or vacations.

Anyone who wants to work at Netflix

This is a must-read if you think you would like to work at Netflix. It lays out the culture completely and you may be in for a shock.

The good news about Netflix employees is that they are paid extremely well. Netflix intentionally pays its workers above their market rate. Workers are given plenty of freedom in the creative process and a lot of autonomy in decision-making.

For example, managers do not approve decisions. Netflix has a dispersed decision-making model where managers choose to give the employees additional context for the problem they are facing. However, it is up to the employee to make the decision and carry out the project.

On the other hand, Netflix state that “adequate employees get a generous severance package.”

It is ruthless. If you are not one of the best, you are quickly out on your ear.

If you think you would like to work for the biggest and best companies around, then it’s worth reading this book to find out what that is really like.

In a time when there is a resurgence in the trade-union movement, the cost of living is rising, some companies are struggling to fill their positions after “the great resignation” this is a fascinating read.

Wages are high because that’s how you keep good people, not because Netflix wants its employees to be able to live a good life.

There are no rules around vacation. Not because Netflix wants its people to have six months off per year and have a great work-life balance but because it fits into a bigger plan about a lack of rules, regulations, and processes that will help Netflix to make decisions and innovate faster.

Regardless of where you fall in this argument, you will find it extremely interesting.

What are readers saying about the book?

The book is based on a few key principles of management. These are freedom and responsibility, talent density, and feedback with radical candor.

These are really easy concepts to understand but are often hard to implement within your own organization. Throughout the book, Hastings and Meyer are able to give real-life situations where the principles have been applied and explain why.

There are even frameworks throughout the book that Netflix uses itself to ensure that its desired culture is continuously being implemented.

For example – talent density. Talent density means hiring and keeping only the best employees. The theory behind this is that if one employee is performing worse than the rest, they will begin to drag the others down with them if there are no consequences. If there is no retribution, then the top performers will begin to realize that they can also perform worse and nothing bad will happen. So, if you are an adequate performer for Netflix, you will be fired.

At Netflix, they have “the keeper test.” The keeper test is when a manager asks themselves, if, hypothetically, this employee came to me saying that they had been offered a job elsewhere and were considering taking it, would the manager fight to keep hold of the employee or would they let them leave?

This is a clear, practical way to implement the concept that has been presented within the book that many of the readers found to be extremely useful.

However, a number of readers also mentioned that it is difficult to implement policies such as only hiring the best at every company. Netflix has an advantage on this front because it’s a cool, sexy company. But it is difficult for Joe’s Paperclips Inc. to keep hiring and firing people when they don’t come up to elite standards.

This also leads us to the readers’ second point where many found the Netflix culture to be extremely honest but cruel, heartless, and ruthless.

The culture does not account for people, it accounts for innovation. It is extremely hard to argue with the results that Netflix have managed to generate from implementing this culture up until very recently but that does not make it a nice place to work or pleasant for its people.

It must be extremely hard to work with the threat of being fired constantly hanging over your head. Friends you have made are regularly being fired, a high turnover of staff. It strikes many of the readers as an extremely difficult and unpleasant place to work.

However, Hastings does not seem to consider this, instead choosing to focus on innovation.

Readers found the concept of having two authors and the way the book has been set up as being a great idea.

They particularly enjoyed the way that Reed could highlight the theory or principle and describe how he would like that aspect of the culture to work. Then Meyer would examine the principle, and present the evidence from the perspective of the employees about how or why it did or did not work from their perspective.

The readers did feel like Meyer could have been more critical in her examination of the ideas that Hastings put forward. The point of the book is to discuss Netflix, its culture and paint it in a positive light, so it’s not like the reader is expecting Erin Meyer to call Reed Hastings an ego-maniac and a monster or anything but they did feel like she could have placed his ideas and actions under more scrutiny.

There were a number of readers that commented the book was simply corporate propaganda for Hastings and Netflix to make them the darlings of Sillicon Valley and the corporate text world.

However, within the book there are a number of legitimate concepts, examples, and ideas that the vast majority of readers were able to accept that the intentions of the book were genuine rather than simply being a marketing tool aimed at recruiting new talent or new investors.

The audiobook was praised by listeners as being very well-produced.

The concept of the two narrators really brings out the differences between the parts where Reed Hastings is discussing the theory and his perspective and the parts where Erin Meyer is examining Hastings’s thoughts and putting forward the cases of what employees, past and present, thought about the principles.

Should I read No Rules Rules: Netflix and the Culture of Reinvention?

Yes. The chances are that you will not agree with everything that this book sets out to achieve with its description of the Netflix corporate culture.

However, it will definitely give managers or leaders insight into things that they can look to implement within their own company in terms of giving their employees more power to make decisions for themselves without having to go through layers of bureaucracy.

It also gives an interesting insight into just how cutthroat life is as an employee at some of the biggest companies in Silicon Valley.