Summary: Raising the Bar: Integrity and Passion in Life and Business: The Story of Clif Bar Inc. by Gary Erickson and Lois Lorentzen 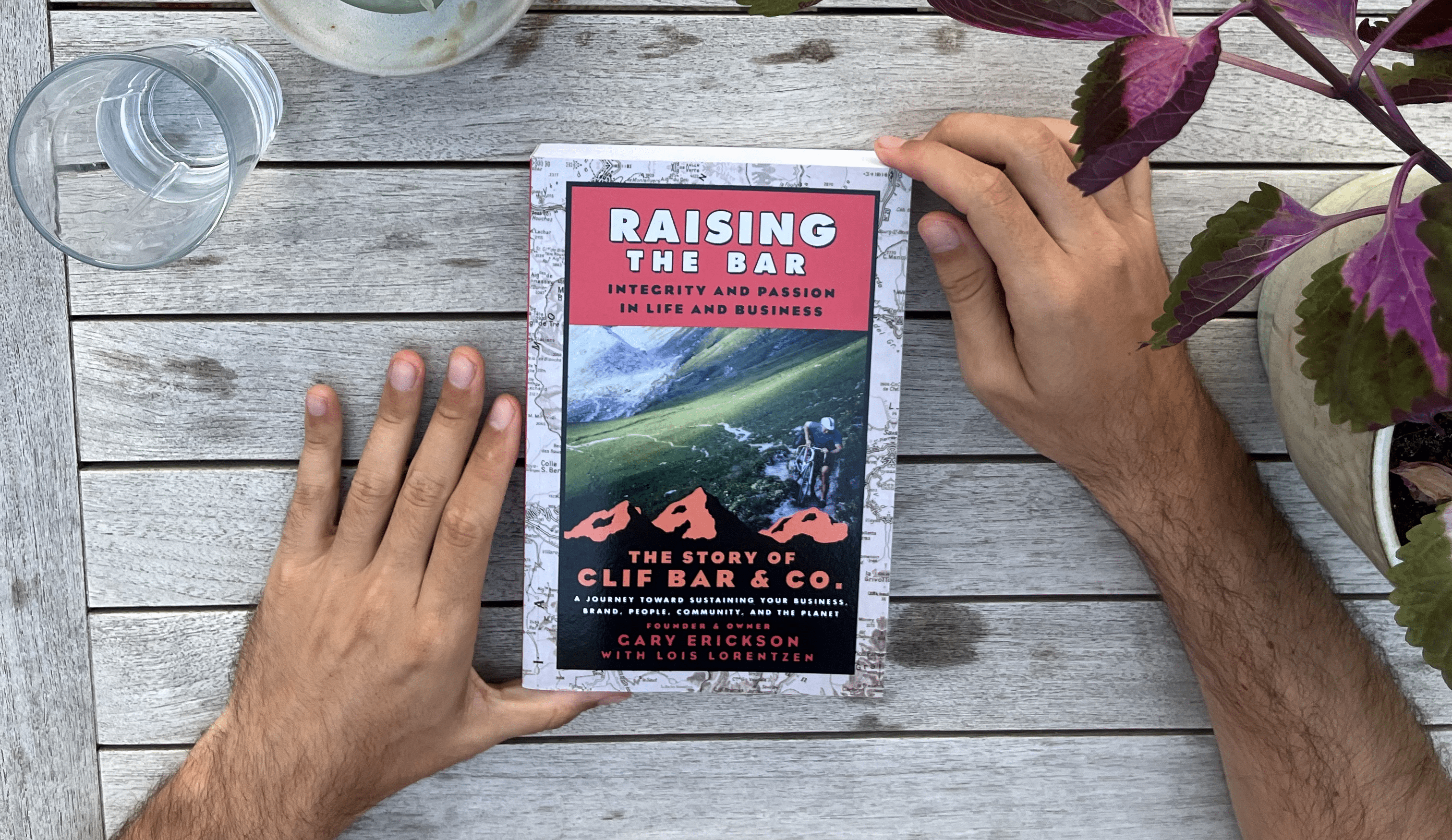 Raising the Bar: Integrity and Passion in Life and Business: The Story of Clif Bar Inc. is the tale of Gary Erickson and Clif Bar Inc.

Gary Erickson was an avid cyclist and on one long ride realized the leading energy bar on the market was pretty much inedible. He figured he could do better and set out to do just that.

We join the story a couple of years after this where Erickson has a $120 million offer on the table from Quaker Oats for Clif Bar Inc. Just as the deal is close to be tied up, Erickson decides it’s not the right thing to do.

This is the story of why Clif Bar Inc. chose to stay private, how Erickson turned down $60 million and spent another $60 million to buy out his partner because his gut told him not to do the deal.

This is an interesting read for anyone that might be in a position to sell out their company to one of the industry big fish. However, it can tend to cover the same ground over and over again making it a little stale – especially in the second half of the book.

Founder, Gary Erickson was an avid adventurer. He had hiked in the Himylayas. He had cycled through unmapped mountain passes in France. He regularly trekked in the Sierra Nevada mountains. But it was one day on a long bike ride that he got the inspiration for the Clif bar.

For these long bike rides, you need a lot of energy, which equals a lot of calories. At the time there wasn’t a huge choice of energy bars. For a ride of the length that Erickson was on he was going to need 6 energy bars to get him through it.

When it came to eating the 6th bar of the ride, Erickson just couldn’t take any more. He physically couldn’t swallow another bite of the dry, cardboardy, tasteless energy bars he had taken with him. He knew he could do better.

So, he set to work. Over the course of the next 6 months, Erickson tried a series of different recipes until he perfected the Clif bar – named after his father Clifford.

Fast-forward another year, and Clif Bar Inc. already has $700,000 worth of sales after getting involved with communities at endurance sporting events. They couldn’t get enough of an energy bar that actually had some flavor.

The growth continued up until the point where Quaker Oats were taking serious notice. They wanted a piece and made an offer of $120 million.

But something was telling Erickson it wasn’t the right thing to do. It was a feeling in his gut.

Raising the Bar: Integrity and Passion in Life and Business: The Story of Clif Bar Inc. tells the story of how Erickson pulled out of the deal, had to buy out his partner for $60 million and went on to grow the Clif Bar into a giant in the space based on 5 key principle or “asiprations.

Who should read Raising the Bar?

Raising the Bar: Integrity and Passion in Life and Business: The Story of Clif Bar Inc. is particularly interesting for entrepreneurs who may one day find themselves in the same situation as Gary Erickson found himself in.

Erickson gives an interesting and thoughtful explanation for why he decided to reject the takeover offer and continue to forge his own path. Despite telling people that it felt wrong in his gut, this is just a surface-level explanation. Erickson goes into more detail in the book.

Businesspeople who are endurance sports fans

Admittedly there are more relevant books for endurance sports fans. However, thrgohuout the book Erickson discusses his adventures from hiking, mountain climbing, and cycling. The book is also littered with interesting business tidbits. This makes it a slightly different read when compared to standard business biographies or management textbooks that are very office focused and can get a little stodgy.

Raising the Bar: Integrity and Passion in Life and Business: The Story of Clif Bar Inc. is a bit of a slow read.

A book like this has the potential to be very self-righteous given that Erickson gave up a lot of cash in order to retain control of his company. However, Erickson manages to strike a more conciliatory tone.

He uses honest and direct language and feels very authentic throughout the course of the story. However, things start to bog down a little and the writing begins to get rather turgid. Erickson frequently repeats himself. This comes under the guise of a recap, but it more seems to be a method for filling space. The book stands at 368 pages but would probably be more readable at around 225 – 250 pages. It feels as though there is a lot of filler in there.

On top of that, Erickson uses a number of labored analogies to compare his management philosophy to that of his sporting endeavors. He strikes gold with the red path vs white path analogy, but a number of other are quite a stretch.

Although the book is supposed to be about taking risks, Erickson can come off as a control freak at times which leaves the reader wondering whether he refused the sale because of community or simply because he didn’t want to relinquish power.

What are readers saying about Raising the Bar?

One of the most interesting parts of the book and the overarching theme is choosing your own path.

Erickson is an avid cyclist and uses an analogy to compare cycling in France to business. The red path is a highway. It’s the well-established path that everyone knows. It has pre-set exits. Predetermined routes that you can take. But the white path is the gravel path. It might be unmapped or incorrect. You don’t necessarily know what you are getting yourself into. But, if you cycle down the white road you have a much better chance of discovering something new.

Many readers found this inspiring. It was a compelling way to explain why Erickson took on the fear and uncertainty of rejecting the takeover offer from Quaker Oats and chose to forge his own path rather than take the safe, well-established red road of taking a buy-out.

Just because competitors like Power bar and Balance bar had taken that path, just because it was the common path, it didn’t mean that Erickson had to accept that as his own destiny.

Gary Erickson has been a competitive cyclist, he loves mountain climbing. Within the book, he talks about trekking in the Himalayas, climbing in the Sierra Nevada mountains, and riding his bicycles over mountain passes in Europe.

Many readers found these sections of the book particularly interesting. It was fascinating for them to get an insight into what these experiences were like, even if it wasn’t what they came to the book for, they found it to be an added (if unexpected) bonus.

It’s not a huge leap from energy bars to endurance sports. However, many of the readers came to the book expecting a more traditional combination of a management book and a biography. Erickson tries to tell the story of his management philosophy through sport but doesn’t quite pull it off despite his adventures being interesting on their own merit.

The author repeats himself a lot in Raising the Bar: Integrity and Passion in Life and Business: The Story of Clif Bar Inc.

The book is written as part biography, part management textbook. The key principles are the “red road vs white road” and the five aspirations of the company of:

Erickson repeats these principles over and over under the appearance of a recap, but in the end, readers felt like they ended up becoming filler in a way to draw out his experiences into a longer book.

In 2022, Gary Erickson and his wife Kit Crawford agreed to sell Clif Bar Inc. to Mondelez, a consumer goods conglomerate, for $2.9 billion.

It is thought that the sale will leave the Ericksons with a net worth of over $1.5 billion given that they are thought to still own over 80% of the company.

The employees own the other 20% of the company and are thought to be in line for a combined payout of almost $600m.

Some readers are able to excuse Erickson given he is now well over 60 years of age and looking to now retire to a quiet life with his family.

However, the entire premise of the book is about retaining control, serving your people, your community, and not selling out to big business. Erickson has repeatedly said in interviews that he has no plans to sell and asks his staff to not even bother informing him when a takeover offer is submitted.

Some of the readers argue that by selling to Mondelez now, everything that Erickson has said throughout the book is basically invalid. The reason he didn’t sell out was that the money wasn’t good enough and he thought he could get more. Now that the right offer has come in, he is more than happy to accept it.

At just under eight hours long, Raising the Bar: Integrity and Passion in Life and Business: The Story of Clif Bar Inc. is roughly average in terms of length. However, listeners complained that it was hard to finish the book as it became to get very repetitive.

Readers resonated with the message that business is not just about growing as fast as you can, working hard for a short time, and getting out with as much cash as possible. The idea that you can build slowly, and sustainably, while taken care of those people who have worked hard to help you grow was important for the readers.

The performance by Richard Harries who reads the book is praised as being engaging but readers did point out that this type of book is generally better when read by the author as that adds an authenticity that is not there when the book is being performed by an actor rather than stories being told by the author.

Should I read Raising the Bar: Integrity and Passion in Life and Business: The Story of Clif Bar Inc.?

This is an interesting book – especially in the first half – for any entrepreneurs who may end up facing the challenge of whether to take the money and run or hold on and try to take a risk to build something bigger than yourself that leaves a legacy.

Erickson’s love of sport intertwines with his passion for business but there are a number of forced analogies where he tries to draw parallels between cycling or climbing with running his business that ultimately end up being a bit of a stretch.

If you are particularly interested in building businesses and communities around those businesses then you may enjoy this book. If that’s not your thing, then I’d recommend trying another title.