Summary: Startupland: How Three Guys Risked Everything to Turn an Idea into a Global Business by Mikkel Svane 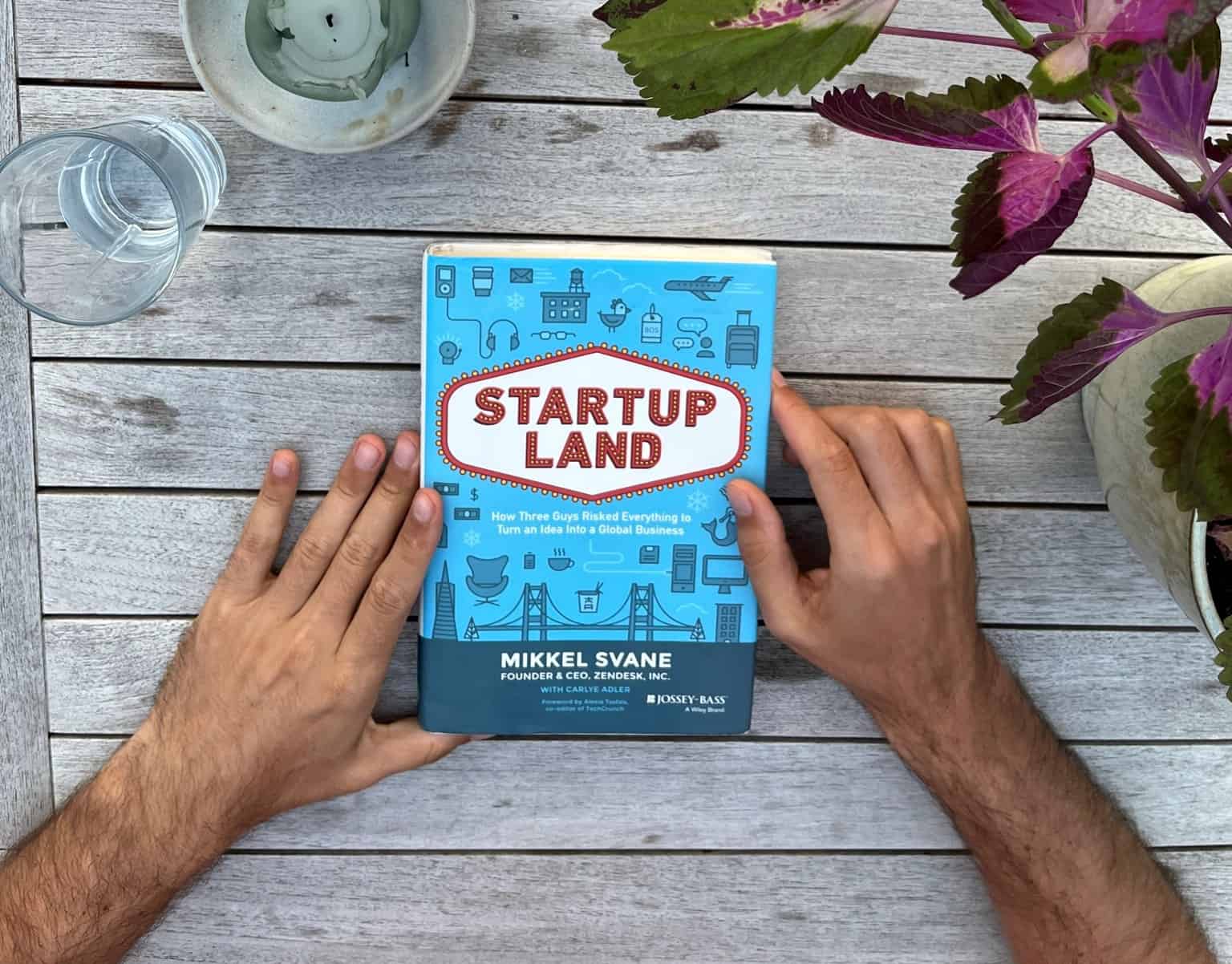 Startupland is a story of Zendesk, a company founded in Copenhagen, and all the ups and downs that the three founders experienced down the road. Mikkel Svane, the author of the book and one of the founders of Zendesk, shares his personal experiences and learnings in building a successful startup without hesitation to diving deep into struggles and roadblocks on the road to success.

Svane explains that the motivation to start a business came from the desire of three friends (and founders of Zendesk) to get out of corporate life and make their own fortune. Since they were in their thirties, with families and kids, they realized the time was running out for them to change their careers and felt the need to act immediately.

As with most startups, the beginning was challenging for the three founders. They started the company in Copenhagen, where all three had regular jobs as much needed source of income to support their new business and their families.

The author looks back at his previous attempts to start a business and how they didn’t turn out as successful as he had planned. He tried several projects, including creating 3D models based on 2D patterns or a tool for producing websites, which failed in 2001 due to the dot-com crash.

Svane points out that it’s ok if your first startup doesn’t end up successful. The goal is to develop an entrepreneurial spirit that will motivate you to try new things even if you fail on the first couple of projects.

Another interesting point that the author makes is that you don’t necessarily have to think about the most fun, “sexy” product or niche when deciding on what your startup should provide. Sometimes the most “boring” niches are the most profitable ones, as there’s less competition and more opportunities to make them appealing.

Zendesk’s purpose was to make radical changes in an area that’s not very interesting for most aspiring entrepreneurs – customer service. But if you have an idea of how to transform a boring category and make it simple and engaging, you’ll transform the niche and find success.

Svane shares experiences with initial attempts to get investors for their project and how it’s very important to choose investors wisely. Zendesk had a rough time with their first investor, who tried to gain the negotiating power knowing that the team needed the money urgently and kept requesting unreasonable amounts of information to put the team under pressure.

Eventually, their rejected the investor’s offer and instead turned to their friends and family for help. While the author argues that asking friends and family for money isn’t easy and can have undesirable consequences, this ended up successful as the project spread around their circle, from colleagues to colleagues’ bosses, and some of them ended up investing as much as $30,000.

He elaborates on different types of investors – the ones that realize the value of the owners and know that they will be successful only if they make sure that the owners are happy and motivated to grow their business and the ones (mediocre and bad investors) that try to work around the founders and only try to improve their own position. Startups that deal with bad inventors end up as disasters, Svane argues.

After initial struggles and eventual success with funding, the company decided to move to the USA, a country that’s best suited for startups to develop and grow, according to Svane. While the business side of things started to improve, the author points out another challenging element in developing a startup – family.

According to Svane, moving a young family halfway across the world was stressful, and the family faced some struggles in adjusting to life in another country. They had to move from Copenhagen to Boston and then all the way to San Francisco, and that was a rough period that even affected Svane’s business. On one occasion, his young daughter locked the bathroom door, and he spent hours unlocking them during the time he should’ve been preparing for an important meeting.

Svane also talks about failure and how some people in the startup world go as far as fetishizing failure. While he agrees that people shouldn’t be afraid to make mistakes and that these mistakes can be a helpful lesson, Svane doesn’t relate to the culture that claims that failure is great.

Svane also discusses the importance of growth with startups. He believes that, as the startup founder, you’re basically always fund-raising. Even after they successfully completed the seed round, they were still looking for investors. Some startups optimize for profit and are able to operate within their own cash flow, but Svane argues that these companies sacrifice growth, and for a startup, “it’s all about the growth.”

Today, Zendesk is a company worth over $1 billion, loved and respected by its customers. The company went a long way, and Svane made sure that he laid out all the bumps on the road, not sugarcoat the success story, and presented to the readers and aspiring entrepreneurs with all the potential obstacles they’ll face on the road to success.

“Startupland” delivers a first-hand experience of how to start, develop and grow a startup. The author doesn’t shy away from sharing all the struggles, both professional and personal, he went through in order to grow the business.

As Svane stated in the book, there is no secret formula for growing a startup, and he’s personally annoyed when people talk about it. He argues that, even if there is a secret formula, the world and the circumstances change so fast that any established rule needs adapting and reiteration.

This book is an honest record of the business owner and does a great job of delivering some unique insights into how challenging and uncertain the startup world is. The additional value of the book is the fact that the founders started their business outside of the United States, thus providing a different perspective from the conventional “Silicon Valley success story.”

Svane is very honest and straightforward, which goes along with the well-known Danish spirit. He’s not running away from sharing the negative sides of their business development and is brutally honest about confrontations, arguments, and sometimes even intense yelling and fights with his colleagues.

One of the readers points out that the book was “clearly not written by someone who writes a lot,” but still found the read enjoyable as it provides a personal feel that’s easy to fly through. The book does give a sense of being a memoir of a sort rather than a business book.

Since the book shares the details of how a group of 3 colleagues grew a successful startup from scratch, “Startupland” is recommended to all aspiring entrepreneurs and people interested in starting their own business.

For people already in the entrepreneurial game, this book will provide great insight into the amount of dedication, hard work, and possible roadblocks on the road to materializing their ideas. As Svane points out, nothing comes simple and easy, and the only way to get to a simple solution is through hard work.

The book also talks about the necessity of taking risks, sometimes big risks, so people who are afraid to take that kind of step could benefit from reading how Zendesk cam through and how important it is to bet on yourself.

How well does “Startupland” compare with other titles in this field?

“Startupland” is a bit different from other books in the genre. As some readers pointed out, the book is very personal and resembles a diary more than a usual “how I grew my business” story.

Readers also compare the book with titles such as “Delivering Happiness” by Tony Hsieh and “Shoe Dog” by Phil Knight, pointing out that the book provides fewer details and skims through the interesting parts.

What do readers say about “Startupland”?

In the spirit of Danish straightforwardness and honesty, readers loved the fact that the author didn’t run away from painting a complete picture of the company’s road to success. This is particularly related to the negative aspects of startups, with early struggles, mistakes, arguments, and all other bumps in the road.

People appreciate the fact that “Startupland” is not a typical business book and success story. They could relate with the author, who they perceived as the “ordinary person” with a variety of weaknesses, like a lack of communication and negotiation skills, which he had to obtain down the road.

This makes the story more believable and relatable to the average person, as it doesn’t drown people with the sole focus on success. Along with that, the author never implies or urges the readers to think like him to succeed, and this is something that readers appreciate.

Refreshing to read about non-USA startup

Most of the readers liked the fresh perspective the book provides, focusing on the fact that the company started outside of the United States. According to readers, most of American startup stories are ego-boosting and over-exaggerated.

“Startupland,” on the other hand, delivers a refreshing modesty and sincerity, characteristic of the Danish mentality. They perceive Mikkel as a “down-to-earth,” honest, and non-pretentious person, and readers appreciate the different type of mindset, not typical for the usual American startup founder.

Not a lot of structured advice

Probably the most frequent critique of the book came from people eager to discover all the ins and outs of the startup business. According to them, the book doesn’t provide structured business advice on how to build and grow a startup.

While they found the story compelling, some of the readers expected to see some kind of “do-to list” that would help them succeed in their own business endeavors. At just over 200 pages, the book is quite short and provides a quick read, and some people expected more for the price.

However, it’s worth noting that the author himself clearly rejects the idea of the formula to succeed in the startup world. According to Svane, things are very fluid, and changes are so frequent that any kind of defined, structured advice for people in this field is not optimal. Instead, the author decided to share his personal experience.

Ordinary people made it

Readers were inspired by the fact that the three founders started and managed to grow a successful business while being well in their thirties. They all had regular jobs, families, and already established lives, yet they decided to take a big risk, get into the uncertain and challenging game and enter the startup world.

Since the author gives the impression of the “ordinary person” that readers can relate to, they feel like the book stand out in terms of profiles of the founders, who are not some prodigies out of Ph.D. to start the company, but rather “regular people with the passion and determination to succeed.”