Summary: The Autobiography of Andrew Carnegie 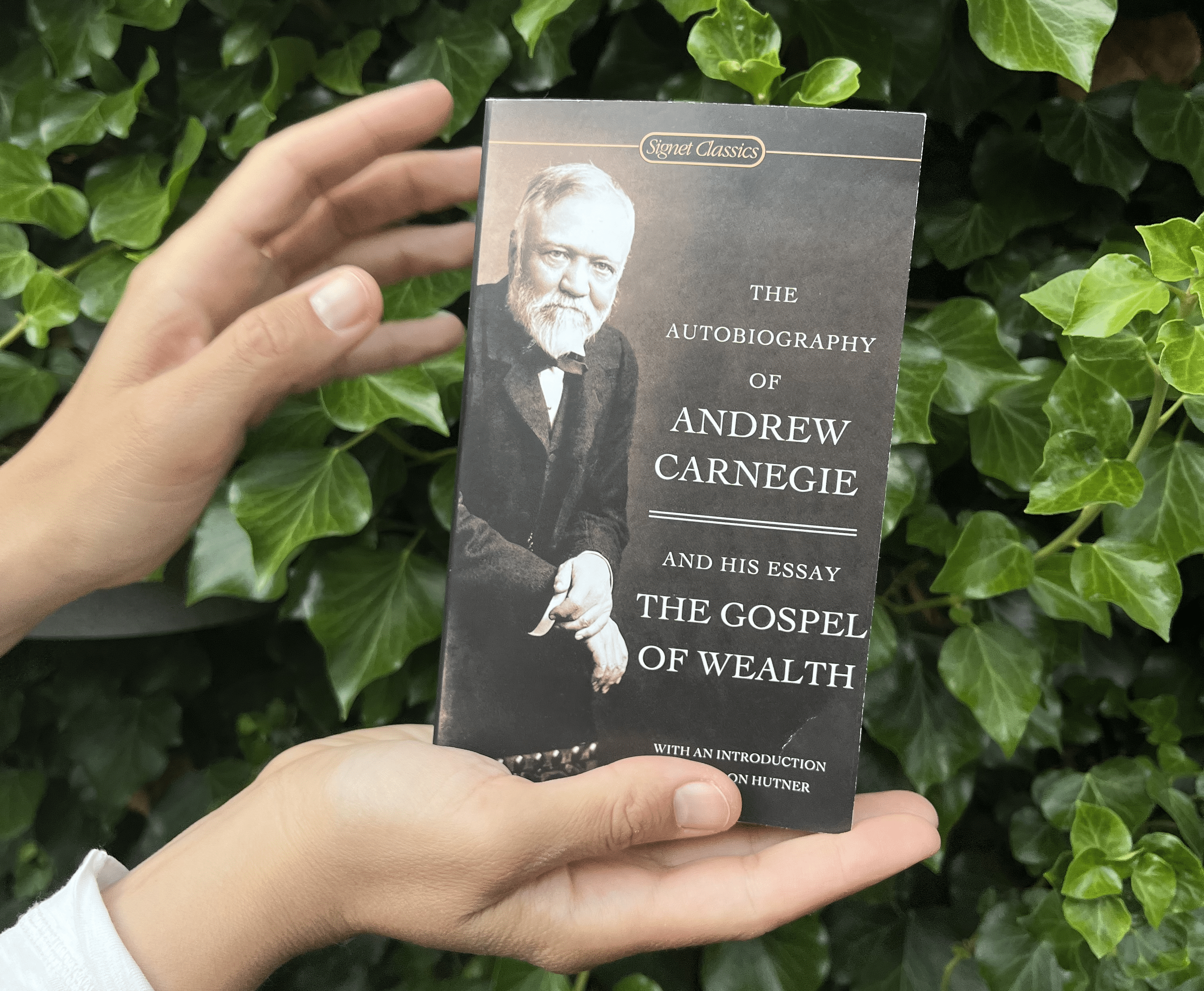 Andrew Carnegie tells the story of the 19th-century steel and rail baron, who at one point was the richest man in the world before giving away over 90% of his wealth.

The book is split into two parts. The first two-thirds of the book goes into detail about Carnegie growing up in Scotland, moving to the USA in his teens, working his way out of poverty, and up the food chain to become the richest man in the world.

The final third is an account of Carnegie giving his wealth away and meeting the figure political and cultural figures in the country at the time. In this section, he also discusses the world as he sees it – including how the German Kaiser is his great hope for world peace.

The Autobiography of Andrew Carnegie is a fascinating read for anyone interested in the time period, how America was built, or the history of business. However, Carnegie is accused of painting himself in a very favorable light throughout the book.

The Autobiography of Andrew Carnegie is his story in his own words. Carnegie was a Scottish-American philanthropist, industrialist, businessman, and entrepreneur.

Carnegie led the expansion of the steel industry in the USA in the late 19th century to the point where it was the largest steel-producing country in the world. For some people, he was considered a robber baron and for others a captain of industry.

He believed that a man that dies rich, dies disgraced. It is believed that he gave away over 90% of his wealth in his own lifetime – a fortune worth over $200 billion in today’s money.

The autobiography begins with an extensive overview of his life growing up in Scotland. In 1835, Carnegie was born in a town called Dunfermline, Fife, on the other side of the Firth of Forth from the capital city of Edinburgh.

He came from a family of linen weavers. His grandfather had founded the first lending library in the town of Dunfermline despite not being a rich man. He simply believes in the power of and access to books and knowledge. This seems to be a lesson that resonated with Carnegie as he went on to fund countless libraries through his philanthropic period.

At the age of 13, Carnegie’s family moved to America. Between the dual powers of the church and the British monarchy, the Carnegies didn’t believe they were living in a real democracy. So they moved to the USA with a real belief in the fledgling American project.

However, the family found themselves in debt as a result of their journey and settling down in the country. With a belief in the American dream, Carnegie, still a young man, set out to work hard to free his family of debt and build their fortune.

He and his father began to work at a textile mill. It was 6 days a week in brutal working conditions for such a young man. But he approached it with an ambitious and optimistic outlook as the first step in his journey toward achieving the American dream.

Eventually, his family moved to Pittsburgh where he was able to secure a job as a messenger boy. After years of working inside in horrid conditions, Carnegie new things were on the up. He was able to be outside, in the sunshine, and ride his bicycle to deliver the messages.

As well as working on the telegrams, Carnegie began to work directly with Scott on the management of the railways.

During the war, when Scott became the Assistant Secretary of War, Carnegie was put in charge of government railways and telegraphs and served successfully.

Carnegie became aware through his contacts that steel and iron were in huge demand and got into the business. With existing contacts in the railroad industry, it was easy to make sales.

By 1889, America had become the largest steel producer in the world. Carnegie was in charge of the vast majority of the industry. That was until 1901 when he sold the business to JP Morgan.

This allowed Carnegie more time to be a man of leisure. He passed away in 1919. These last 18 years are where he wrote his autobiography and other books. At this point of the book is where he begins to fill it with notes of politics, the figures of the day and how he gave away his fortune. He left most of his wealth to libraries and universities. Late in life he also called on the rich to use their wealth to benefit society, resulting in an upturn in philanthropy.

Who should read it?

Carnegie’s story is fascinating for anyone with an interest in history.

It covers migration from the old world to the new, the building of America, the civil war, the creation of the railroads, and America’s transformation to an industrial powerhouse and a world leader – in which Carnegie had a huge part to play.

This book gives a fascinating insight into Scotland in the middle of the 19th century before the Carnegie family sets off to the USA. In later life, Carnegie returns to Scotland a number of times, spending a lot of time at Skibo Castle, way up north in the highlands.

Carnegie was at Skibo during the Homestead strike and paints a picture that suggests the deaths wouldn’t have occurred during the strike if Carnegie had not been in Scotland at the time.

Interest in wealth, barons, and philanthropy

This is the story of how a man built the equivalent of a $200 billion fortune. If you are interested in building wealth then there are lessons that you can take from this book.

Throughout the book, it also touches on a number of other industrialists, such as – Thomas A Scott, Charles Schwab, and JP Morgan.

Tone of The Autobiography of Andrew Carnegie

Andrew Carnegie is a fairly good writer who manages to maintain the reader’s interest throughout the book – especially within the first two-thirds of the book. He shares his thoughts, experiences, lifestyle, and favorite quotes, so it’s an interesting insight into the man and an interesting read.

One reader commented on Carnegie’s writing style that it’s easy to imagine yourself sitting in an armchair with a glass of scotch listening to him regal you with old tales.

In the final third he is unguarded in sharing his political thoughts at the time. It’s like stepping into a time-warp to get a snapshot of the perspective of the politics of the time. We have the benefit of hindsight in terms of how things worked out with the two world wars, so it’s interesting to see how positive and, perhaps, naive Carnegie is in his views.

He also name-drops a lot in the final third. This is only a problem in so far as the modern reader will most likely not know who the people are that he is referring to. Given they were household names at the time, Carnegie doesn’t feel the need to explain, so this can be a little frustrating for the reader.

What do readers say about the book?

“A sunny disposition is worth more than fortune. Young people should know that it can be cultivated; that the mind, like the body, can be moved from the shade into sunshine.”

“That best portion of a good man’s life— His little, nameless, unremembered acts of kindness and of love.”

“He that cannot reason is a fool, He that will not a bigot, He that dare not a slave.”

These are a few examples of the quotes and wisdom that Carnegie shares with the reader throughout his book. And there are plenty more examples of nuggets of wisdom where Carnegie touches on learning, public speaking, risk, how to treat other people, controlling your mood, networking, travel, and the pursuit of wealth over other knowledge.

Throughout his life, Carnegie experienced hardship and poverty. But, he also met presidents, celebrities, and other industrialists and traveled the world. Readers found Carnegie’s life experiences to be fascinating.

Looking for more detail on building the businesses

Despite building a number of businesses and ultimately selling to become the richest man in the world at the time, Carnegie fails to go into minute detail that a business person might be interested in hearing about throughout the book. It is the story of his life rather than the story of his businesses. If you are more interested in finding out about his business, this might be frustrating.

Paints himself as a friend to everyone

Some readers going into this book with prior knowledge of Carnegie are surprised to hear him paint himself as someone who has such a sunny disposition and is a friend to everyone. However, Carnegie has a reputation as a hard-headed businessman and a union buster. So for him to paint himself as a friend to black people, to labor and the worker, and to all people, in general, seems slightly out of step with what others think of him.

At this point, many readers commented that they would be interested in reading more about Carnegie from a neutral third party in order to understand how biased his account of himself is.

Final third drags on a bit

The final third of the book that outlines Carnegie’s retirement is out of step with the rest of the book. What had been an enjoyable book for many up to that point fizzles out with a whimper rather than a bang.

This is particularly disappointing given such an eventful and interesting life finished in such a boring way for so many readers. It is at this point that Carnegie starts to fill his book with his meetings with the great minds of the day. However, many of these great minds haven’t stood the test of time, therefore modern-day readers are left clueless about who Carnegie is actually talking about.

In general, listeners believed the narrator was very good. In some versions, the narrator has a Scottish accent with listeners feel added a touch of authenticity to the performance while still being easy to understand.

Others, however, complained that the narration was a little slow and dragged on. While this was also the case for others, they suggested that turning the narration to 1.1x speed actually made a huge difference to the flow of the narration making it slightly less monotone.

Some users also complained that the volume was slightly low, even when turned up to full volume, so it was difficult to listen to the book without headphones on – e.g. through car speakers – where there are competing noises.

Should I read The Autobiography of Andrew Carnegie?

For anyone interested in US history, the history of business, the robber barons, and a range of other topics then The Autobiography of Andrew Carnegie is a good read.

However, it is a one-sided account where Carnegie sheds himself in a far more positive light than many believe he deserves to be shown in. As such, a large number of readers stated they wished to read a third-party biography of Carnegie after reading his life in his own words to get the full picture.