Summary – The Undoing Project: A Friendship That Changed Our Minds by Michael Lewis 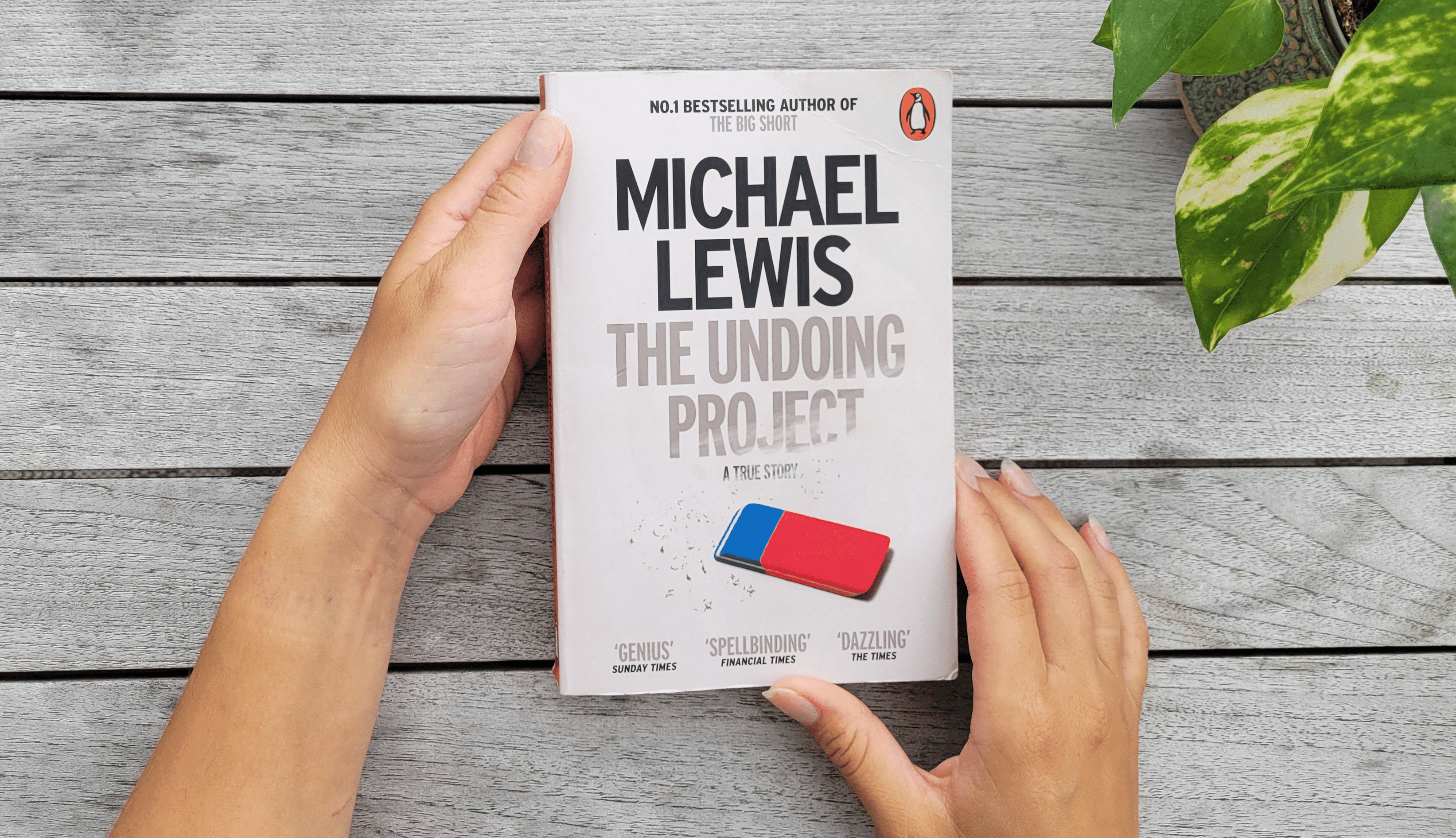 When Michael Lewis wrote his book Moneyball – about how the Oakland A’s used data to re-identify what makes a player good and identify market inefficiencies in baseball – he wasn’t aware of where these concepts originated.

The Undoing Project: A Friendship That Changed Our Minds tells the story of Daniel Kahneman and Amos Tversky. The two Israeli scientists who formed a friendship, and worked together to create a series of papers that invented the field of behavioural economics and changed the way that the best and brightest tackle the world’s most challenging problems today.

Michael Lewis explores the two scientists’ relationship through its ups and downs but also explains their work, the thinking behind it and the impact it’s had on the world we live in today.

This is a fascinating read for anyone who might think they are a logical person or is interested in solving problems.

The Undoing Project: A Friendship That Changed Our Minds is the story of Israeli scientists Amos Tversky and Daniel Kahneman, their friendship, and their discovery of the field of behavioral economics.

Although Lewis has not tied the two books together in any meaningful or official way, it feels like The Undoing Project is a continuation of Lewis’s work on Moneyball.

In Moneyball, Lewis looked at iniffiencies in the marketplace – especially when evaluating the talent of people. He does this in the context of baseball with the MLB team the Oakland A’s.

When writing this book, Lewis was focused on the market as a whole, conventional wisdom, and the way that the A’s used data to challenge that conventional wisdom. At the time, Lewis was not aware of the scientific research that Kahneman and Tversky had authored together. Once Lewis read the works of Kahneman and Tversky, he realized he had missed a much bigger story than market inefficiencies when he was writing Moneyball – the bigger story was how to human mind works.

In The Undoing Project, Lewis follows his time tested method of choosing a subject or subjects – Daniel Kahneman and Amos Tversky in this case – and uses them as the vehicle through which to tell the story of the field of behavioural economics, how we discovered that we are in fact, not rational when it comes to making decisions but instead we are emotional.

The pair famously say: No-one ever made a decision based on statistics, they need a story.

Lewis tells the story of the pair meeting at Hebrew University in Jerusalem, the he goes onto detail the spark that allowed the pair that are complete opposites to form a friendship for the ages that changed the world and the way that we tackle problems.

For example, when working for the Israeli army, the people in charge of fighter pilot training realized that when they praised a pilot for doing something well that they quickly started to perform worse. So, there was a rule in place where they did not praise pilots after their flights and chose to criticize them instead.

However, Kahneman realized that this was a complete fallacy. What was happening was that after performing well, a pilot was more likely to perform poorly soon afterward as their performance was likely to refress to the mean. It did not matter whether the instructors chose to praise or criticize the pilots, their level of performance was always going to balance out to the average. If they did poorly and were criticized, they were likely to get better soon as well as their performance would average out.

The Undoing Project is full of simple, yet insightful examples, explanations, experiments and case studies that explain the myriad of ways that our thinking can be flawed without us even realizing it.

Who should read The Undoing Project?

The Undoing Project tells the story of the discovery of and the men who discovered the field of behavioral economics. So this book is a really interesting introduction to many of the basic concepts of the field.

This is a must-read for anyone that has to make any kind of major decision at their work. The Undoing Project is not a detailed examination of decision making itself.

But, Lewis does cover a number of experiments, and explains Kahneman and Tversky’s thinking in designing the experiments and what the experiments taught us about how our brain functions in the decision making process.

This book will lead you to question whether or not you can trust your own perception and biases when making decisions and start trying to question all of the information that you have available to you before taking the plunge.

As with all Michael Lewis books, The Undoing Project has a story. It is not a self-help book.

Lewis is famous for his really easy-to-consume writing style where he is able to take complex, confusing topics and break them down using extremely simple language without jargon, buzzwords, and a tranche of confusing acronyms.

The Undoing Project is a biography of the two scientists – Amos Tversky and Daniel Kahneman. The story is fascinating, especially given the political situation in Israel in the 60s when the two met. So, despite being a biography of two academics, both the situation of their lives and the work they were doing, manages to turn what could have been an extremely boring, explanatory book into a page-turner and a tear-jerker.

What do readers say about The Undoing Project?

While this is a book exploring the relationship between Kahneman and Tversky, it is also based on their work and the impact that left on the world.

To do that, large sections of the book explain a number of psychological tests that the pair created to show that humans are in fact NOT rational but emotional in their decision-making.

Much of this could be highly technical or difficult to follow, but Lewis manages to break the theory down into its most basic principles and center it around a story rooted in people rather than just looking at the results or numbers. He explains the emotional thinking that clouds or decision-making and the mathematical reasoning that shows us why in certain situations, we make decisions that are clearly counter-productive.

Most people mentioned that they found this extremely interesting, but it is also hard to get away from the fact that large parts of the book describe psychological experiments that some readers feel slowed down the pace of the book.

Can’t decide what it is

For those who did not enjoy the book, their biggest gripe was that the book could not seem to decide what it was.

For those who enjoyed the book, the mixture of theory, explanation, and biography was one of the most interesting parts, but many of the detractors mentioned that they wanted Lewis to pick one thing and stick with it.

They felt that for a book that was meant to be about how two scientists changed the way that we think when solving the biggest problems we face in the world today, there was too much focus on banal, personal details. Like the petty arguments between the pair, or the cadence of their speech, or the color of their ties, or the way their lips lilted when they smiled.

Better to get it straight from the horse’s mouth

The detractors that did not enjoy the biographical part of the story were essentially left with the science.

In this case, they were left with Michael Lewis’s interpretation of Daniel Kahneman and Amos Tversky’s work. While they all acknowledged that Lewis did a very good job of making the two scientist’s work consumable, they also pointed out that Daniel Kahneman wrote his own book called Thinking, Fast and Slow which explained his science and his theories in a way that is accessible to the mass market.

On the other hand, the readers who did enjoy the biographical part of the story mentioned they felt The Undoing Project was an excellent narrative companion to Thinking, Fast and Slow that provides context and understanding to how these theories were developed.

For many readers, they mentioned that they felt like this book was the conclusion of the missing part of Moneyball.

Lewis has acknowledged that while writing Moneyball he wasn’t aware of the work of Kahneman and Tversky. Lewis has said that in telling the story of Moneyball he was trying to tell the story of market inefficiencies – how they worked or failed when valuing people – and how there are opportunities out there that can be exploited by underdogs to level the playing field against teams or companies with more resources.

However, once Lewis read Kahneman and Tversky’s papers he realized that there was another layer beyond simply how markets evaluated people and their talents. That layer was the story of how the human mind works when it is trying to make decisions.

As such, both Lewis and the readers felt like The Undoing Project wraps up the story that Lewis started telling with Moneyball.

The Undoing Project is 10 hours and 17 minutes long on Audible. It is narrated by Dennis Boutsikaris.

Boutsikaris is a vastly experienced narrator across both fiction and nonfiction with over 60 books narrated by him available on Audible. Listeners commented that he did a very good job explaining the denser parts of the book, although the mentioned that at times they had to rewind and listen again as they missed some important details within the experiment.

Some readers mentioned turning the listening speed faster in general but then others also mentioned slowing the book down at times when Boutsikaris was talking about the experiments so that they could get the detail.

Michael Lewis has narrated a number of his own audiobooks and he does a very good job at this. He is a very experienced broadcaster and podcaster so he is very competent. He also has a very distinctive voice and style which adds to his book. Many of the listeners were slightly upset that he was not narrating himself as that would have added a level of authenticity to the performance without losing out on the performance quality – which you often do when some authors narrate their own books.

Should I read The Undoing Project?

The Undoing Project is a very interesting read for someone who is looking for a slightly more surface-level insight into behavioral economics than they would get from reading Thinking, Fast and Slow.

In The Undoing Project, Michael Lewis is able to give the reader a basic overview of the concepts of behavioral economics at the same time as telling the fascinating story of the two academics who came to define the field. This combination keeps the book light and interesting while also tackling some complex science.