Summary – Utopia for Realists: How We Can Build the Ideal World by Rutger Bregman 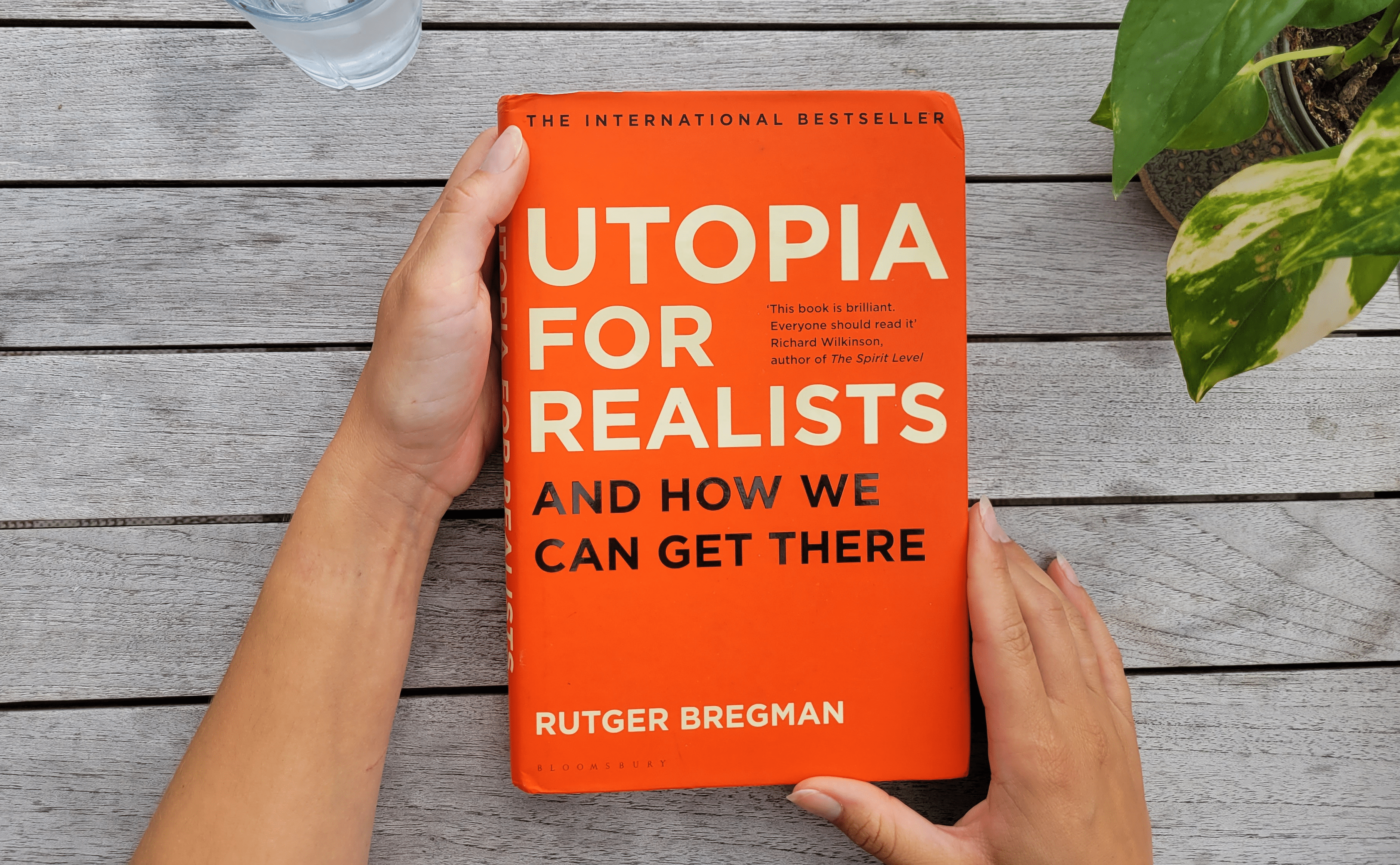 Utopia for Realists: How We Can Build the Ideal World is a proposal for three key policy ideas that will help to make the world a better place.

Dutch historian, Rutger Bregman lays out, not his dream world, but a better world where there is:

This is an interesting book that is extremely well researched and engagingly written. It is an interesting read. What seems preposterous on first glance begins to feel more and more sensible the further you get into the book.

However, you still cannot hep but come away from the book thinking it’s never going to happen.

Utopia for Realists: How We Can Build the Ideal World is a vision for a better world from Dutch historian Rutger Bregman.

Bregman believes that ideas can change the world. Bregman’s overarching belief is that people should have enough food to eat, a place to live, be able to live with dignity and enjoy their lives.

This is perhaps more controversial than it should be, but is not the main area where Bregman’s book has created controversy. In order to achieve this vision of utopia, Bregman suggest three major policies:

The book is well researched. Throughout the book, Bregman makes the case of what he thinks should happen and then backs them up with a series of research papers and case studies.

So, where an idea may sound completely mad, ridiculous or impossible to implement in the beginning, once you finish reading the proposals made by Bregman you begin to feel it is completely sensible and logical.

Bregman’s first proposal is for a Universal Basic Income.

Bregman cites an example of a homeless charity from 2009. Costs for looking after the homeless people were skyrocketing. It was a constant cycle of police, hospitals, community workers, etc. Basically, it was incredibly expensive to care for these few people.

So, they decided to trial a version of UBI with 13 homeless people. Each of them was given $3,000 with no strings attached. There were no conditions whatsoever.

The assumption was that they would waste the money on drugs or alcohol. However, twelve months later 7 of the 13 had a roof over their heads. A further 2 were on a waiting list that had them ready to move into a new place shortly. All 13 had used the money to make steps towards solvency and personal growth.

The outcomes were better than if the charity had continued to use the money to keep doing what they had been doing. In fact, the UBI trial actually cost $300,000 less than it would have cost to keep things running the way they always had been.

Bregman argues that people know what they need. The poor decisions that people make are driven by the pressure of poverty and insecurity. People get trapped into a cycle of poverty but having the security of knowing there will always be a base level of money will help tem to escape that cycle of focusing on surviving right here and look to the longer term so that they can grow as individuals.

The second proposal is a 15-hour work week.

Bregman suggests that we should mandate a 15-hour work week by law. He also suggests we should completely overhaul the tax system.

He argues that with the advances in efficiency and productivity over the last 100 years, we should be living a life of leisure. Instead, society has become hyper-consumerist.

As such, instead of having a shorter work week and enjoying our lives, we are stuck in BS jobs that are designed to fill up our time. These jobs are neither necessary nor fulfilling.

Further to his argument, Bregman says that the great minds of our time are now incentivized to go to Wall Street, become bankers, and get rich. In the past, these people would become politicians, teachers, academics, and scientists.

Bregman suggests completely reworking the tax code to incentivize these types of jobs that do good for the world rather than incentivizing people to get rich by moving imaginary money from one place to another.

Bregman’s final suggestion is to open all borders. Currently, where a person is born is the best indicator of how long they will live, how much money they will make, and what education level they will reach.

The author views this as some kind of sanctioned apartheid on a global scale where we are quite happy for people from rich countries to earn 5x, 10x or 20x people from poorer countries for doing the same job, simply because of where they were born.

Bergman cites the idea that after a century or more of giving aid, the leading economic thinkers cannot agree on whether it actually works or not. Whereas, almost all of the leading minds in economics agree that open borders and free mobility for workers would make the world almost twice as rich as it is now.

Across his three major arguments, Bregman cites a lot of studies, consensus thought by experts, and even details about how his proposals would work. However, he has come in for criticism for not providing enough of a roadmap detailing how to overcome the status quo and the powerful interests who benefit from life as it is at the moment.

However, Bregman does recognize the success that neo-liberals had in convincing the public of their vision and implementing their ideas when they got into power. Towards the end of the book, Bregman charts this rise to power and the lessons the left can learn from it and apply to their struggle to achieve Bregman’s vision.

Who should read Utopia for Realists?

If you are going to read Utopia for Realists, you really should have a deep interest in politics. Although Bregman may intend for this to be a book for the masses, it is extremely packed with political theory, research, statistics, and information that will be meaningless to most people.

What Bregman does do successfully is paint a picture of a better world. If you are someone that believes that things need to change drastically, then you will enjoy this book, even if you do not agree with everything in it.

Interestingly, the book is aimed at people with a general interest in politics or a passing interest in UBI. It is not just aimed at left-leaning people but is aimed as a book to be read across the entire political spectrum. Bregman aims to convince everyone of his arguments and it is worth time taking them in and understanding them, even if you don’t agree with the points that he is making.

Utopia for Realists is extremely well-researched and well-written.

Bregman is extremely convincing. This partially comes from the matter-of-fact tone in which he writes as though what he is writing is completely sensible and somewhat obvious.

It is as though Bregman does not realize he is writing a radical manifesto for revolution. Perhaps he does not or does not view it as such.

The book is packed full of complex ideas that are supported by research papers, graphs, and statistics. This can get a bit dense at times and forces the reader to back off and take a break.

It is not an easy read, it is challenging but it is designed to be so.

What is interesting about the book is that Bregman is not writing this to preach to the choir. The book is not necessarily aimed at left-wing radicals who already believe in UBI. Bregman is actually writing the book to try to convince those in the center and on the right of the political spectrum that this is a good idea.

What do readers say about Utopia for Realists?

Convincing and backed-up by research and statistics

Readers were impressed by the arguments and rationale behind the points that Bregman made throughout Utopia for Realists.

They were particularly impressed by the number of research papers, graphs and case studies that Bregman was able to call upon to back up his points from people he was not affiliated with.

At times, the evidence provided was more anecdotal through case studies than verified, statistically significant data from peer-reviewed research papers but on the whole, readers felt like the arguments were well thought out and thoroughly researched – especially his arguments on Universal Basic Income.

Case for open borders is vague

On the other hand, readers felt as though his arguments on open borders lacked the same depth as his other arguments.

Where many were convinced that UBI is a feasible idea that could be implemented in a number of countries, they felt that open borders would need a global solution. At this point, the whole concept of government with open borders seemed to be in question. Is Bregman suggesting the end of nation states? Is he suggesting a worldwide government?

In this case, many readers felt like Bregman was light on the detail, even if his rationale for the proposal came from a good place.

Doesn’t tackle how we get there

An alternative title to the book is Utopia for Realists and how we get there. Readers complained that Bregman only fulfilled 50% of the title.

They suggested that Bregman puts plenty of thought, research, and data into the argument of UBI, open borders, and a 15-hour work week but he does not pay the same level of care and attention to his argument of how to actually implement these ideas.

The audiobook for Utopia for Realists: How We Can Build the Ideal World is on Audible. It lasts for 6 hours and 32 minutes and is narrated by Peter Noble.

Noble has narrated numerous audiobooks in both the fiction and non-fiction categories. This includes the extremely popular A Line in the Sand: Britain, France and the struggle that shaped the Middle East.

Most readers were impressed by the narration but the impression seems to be that the arguments are less persuasive in audiobook format when compared to the text format given the listeners cannot see the graphs and charts that the reader can see that are so crucial to the book.

Should I read Utopia for Realists?

Yes, if you are especially interested in politics. Otherwise, this is probably not the book for you.

Regardless of where you are on the political spectrum, Utopia for Realists: How We Can Build the Ideal World throughs up some interesting points that are backed up with some compelling arguments and research.

However, if you do not have a deep interest in politics and policy, this book will get boring very quickly.